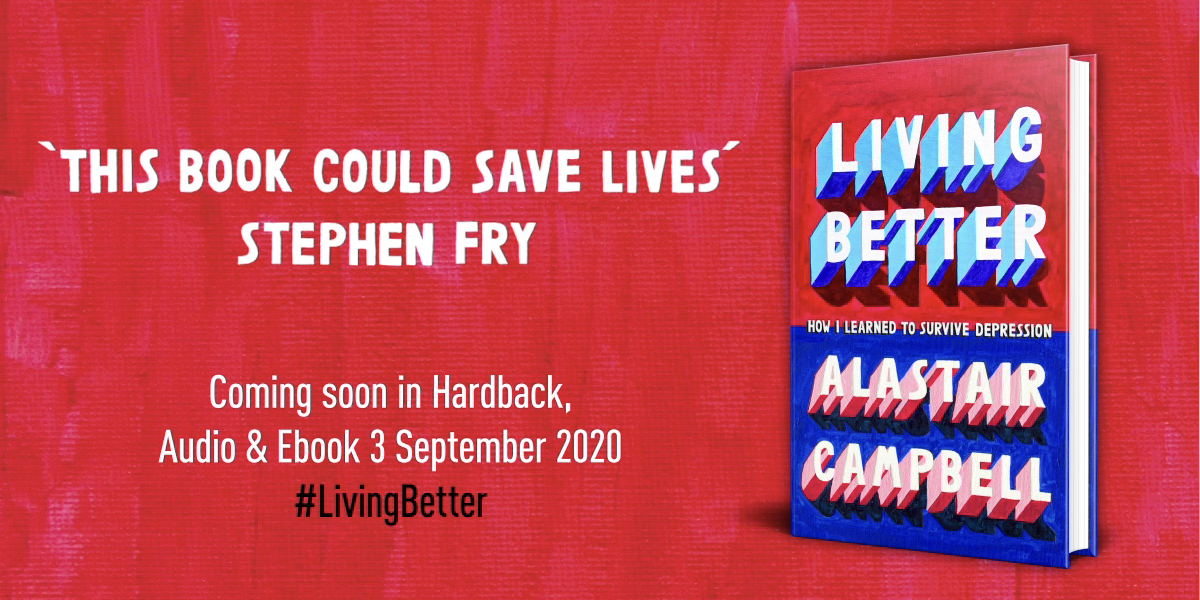 Today should have been a good day. Publication day. My book on depression. It is my sixteenth book, and it’s always a nice moment when a new one pops up in bookstore windows, or lands on the doormats of those who pre-ordered. It’s when you feel that the solitary work of the writing process starts to be shared with others.

We had The Observer running extracts on Sunday; last night a mental health charity event; tonight a literary festival; tomorrow a school and an event for a company that wants to buy a copy of the book for all of its staff; and all week lots of interviews for press, radio, TV. Then Covid-19 came along and ruined it all.

The postponement of a book launch from May to September does not of course merit the same angst as tens of thousands of deaths making the UK one of the worst hit countries in the world, or the economic slide and consequent social tensions that Covid-19 is inflicting on the world. But it certainly underlines its universal impact, just one among many hundreds, thousands, millions, billions of changes in people’s lives, large and small, that we have had to live with, and adapt to, since coronavirus replaced Brexit and football as the go-to subject of most of my, and everyone else’s, conversations.

I was reluctant to delay. Partly my nature … the book is done, I want to get out and promote it, and use it further to shift the dial on mental health. But with bookstores closed, every event that we had lined up cancelled, and the media rightly focused mainly on Covid-19, in the end I bowed to the inevitable.

I’ve also changed the title. It started out as Better to Live. Now it is Living Better. As, day after day, the Covid death toll rose, the publisher started to worry that my original title might seem insensitive, and much as I loved Better to Live, I had to agree. Of course it is better to live, but so many people, right now, don’t have the choice. How is someone going to feel, still in grief maybe as they walk past a bookshop and see the title there in the window, or they see me pop up on TV saying you know what, it really is better to live?

Perhaps I was being too sensitive. After all, several of the pro-Boris Johnson newspapers felt able to run huge headlines about ‘Happy Monday’ on what turned out to be false suggestions that the lockdown was about to be lifted, on the day we passed Italy in the European death league tables. But no, those awful front pages actually confirmed me in my view, as I wondered what on earth someone who had lost a loved one to this virus, so ineptly managed by the government, would have thought on seeing such gross insensitivity. So, Living Better it is. And fear not, it is not a book about coronavirus. There will be more than enough of those.

I have though written a new introduction, to consider some of the mental health consequences of what is happening; for NHS and care workers dealing with this; families unable to say farewell, or console and bury loved ones; children unable to take exams for which they have worked; children de-socialised through lack of contact with friends; businessmen and women seeing their life’s work vanish; couples forced to confront their inability to spend time together; victims of domestic violence; the anger that is going to erupt if it becomes clear that thousands of deaths were the consequence of policy and capacity failures, as economic problems deepen and unemployment soars … without being too apocalyptic, it is possible that however bad the crisis that the Covid earthquake has unleashed, the aftershocks will be far, far worse.

Overnight I received an email from a friend and fellow depressive, Geoff Gallop, the former Premier of Western Australia. It was a report by Professor Ian Hickie of the University of Sydney’s Brain and Mind Centre, warning that suicide rates could rise by up to 50 per cent in the wake of the catastrophic and prolonged economic impacts of COVID-19. The report argued that the ‘best case scenario’ was a 25 per cent increase in suicides in Australia, with the likelihood that about 40 per cent of those will be among young people. Professor Hickie said the modelling indicated if the economy deteriorated further, that figure would escalate to a 50 per cent increase in the number of lives lost to suicide with rural and regional areas hardest hit.

So that is Australia, which has had fewer than 7,000 cases and just 97 deaths. What the impact in the UK might be, with deaths in the tens of thousands, and the Bank of England forecasting the economy to shrink by 14percent and unemployment to double, is anyone’s guess, but it is not a happy situation. Not for nothing is the word for sustained economic slump … depression. It certainly seems inevitable that if and when we do emerge from this crisis, we will do so accompanied by a veritable tsunami of psychological and psychiatric distress. Perhaps those of us who are used to bouts of poor mental health have something of an advantage here; more than once on my morning walks, and in emails and exchanges on social media, people have said to me that they have been beginning to ‘understand what it must be like.’

I hope the book will also help people understand what it is like. But more than that, I hope it will help people live better, both those who get it, and those who don’t, but have to live with it in others.

If you want to pre-order a signed hardback copy, Waterstones will oblige, if you visit them here.

And finally, BBC2 have announced they will be repeating my documentary, Depression and Me, on May 20 as part of Mental Health Awareness Week. So look out for that if you missed it first time around, or if you’ve forgotten what I said!!

Cameron had better be sure he’s right