As we slide one more week closer to the calamity that Brexit will bring, two memorable meetings stand out for me from the past few days. The first, of which more later, was on Monday evening inside Brixton Prison (cue ‘shame they let you out’ tweets from the usual saddoes). The second, on Thursday morning, was with around 250 university recruiters whose job is to lure the best and the brightest graduates to work for their companies and organisations. Both meetings shone a light on how conventional wisdoms can be so far wrong.

At any speaking event these days, I ask the audience for a show of hands in response to the question ‘are you broadly optimistic or broadly pessimistic about Brexit?’ With the recruiters I did this at the start of my speech, so it was not as though I had even had time to spin and brainwash them in my anti-Brexit direction. In answer to ‘broadly optimistic?’ one hand went up, and it belonged to one of the few people in the room who was of my generation. For the other 249 or so … you get the picture. Pessimism by a landslide.

The theme of the event was the post-truth world. It is a phrase we tend to associate with Donald Trump. But it applies equally to the LEAVE campaign that won the referendum, and the way the government has handled Brexit since. We are post-the-claim-that-Brexit-will-deliver-£350m-a-week-more-for-the-NHS, and Boris Johnson would not have enjoyed the show of hands in answer to a question about him. But he is Foreign Secretary, Donald Trump is US President and Nigel Farage can’t wake up without a BBC sound recordist or camera operative recording his words. In the post-truth world, to the liars the spoils …

The conventional wisdom on Brexit is that as the people have spoken, there is no going back. Brexit means Brexit whatever the cost. Theresa May has taken that to the logical next post-truth step, claiming that she has the support of 65million Brits in her negotiations. This is straightforwardly untrue. She doesn’t have mine and I know plenty others like me.

It is not hard to shape a false conventional wisdom when you have so many newspapers who were into post-truth journalism long before Trump came along, and who having helped lay the ground for the LEAVE vote in the first place, now seek to pretend that beyond the triggering of Article 50 lies a land for all of milk and honey, vestal virgins, or whatever your fancy may be.

But for all the weight of media propaganda, and the political weight of both main parties voting for Article 50, here was a fairly sizeable sample of mainly young professionals, plugged into the talent and the economy of the future, who just are not buying it.

Ah, woof woof the Pavlov-dog Brextremists, this was London, they are the dreaded Metropolitan elite (a group that clearly doesn’t include Farage or Johnson, let alone Paul Dacre and Rupert Murdoch). The event was indeed in London, but people came from all over the place. Most would be on a lot less than Farage’s MEP salary that he takes for the job he doesn’t really do, so busy is he being a media tart, gate-crashing POTUS dinner parties and hoping to secure a knighthood (hypocrisy alert) for services to anti-establishmentism. These people at my Thursday breakfast are not the elite. But they are the future. And what that show of hands indicates is a government that is running against the interests of its own young people. That strikes me as something of a disastrous approach to take.

Also speaking was broadcaster and economist Declan Curry who described the government’s confidence in our post-Brexit economic future as ‘delusional.’ It is. It rests on only believing what you want to believe, and only seeing what you want to see, two essential components of post-truthery. But when so many people, especially younger people, are fearful we are heading like lemmings to the cliff-edge, then eventually a real wisdom will replace a conventional one once the actual process of exiting gets underway … the wisdom that will coalesce when enough people realize that what they were promised is not happening, that even the best deal available is so much worse than what we have now, and that the potential costs of the hard Brexit favoured by Mrs May far outweigh any remotely possible benefits.

So having been so mightily disheartened by the way Parliament, both government and Labour, have handled the biggest issue of our lifetime, I was hugely heartened by this meeting with the recruiters. It confirms me in my view that when the Brexit process does start to go belly up, the movement in public opinion will be sharp, because the base is there. Read the papers, and you’d think it was all over. It’s not.

Conventional Wisdom Number 2: prison works. Well, it might work for some. It works for those who like their punishment hard and who want anyone who might pose a threat to anyone else to be banged up. But you would be hard pressed to say we have prison systems which get the balance right between punishment and rehabilitation. Meanwhile, as the government bandwidth gets fully consumed by Brexit, prisons seem to be joining the NHS, housing and policing on the ‘crisis’ side of the ledger.

If I was heartened by the university recruiters I was even more heartened by the prisoners I met in Brixton, when I spoke at an event organized by Housemark, experts in social housing. The dinner was at the Clink restaurant, one of four inside our prisons which are run by The Clink Charity, and where prisoners are trained as chefs, waiters and caterers, get City an Guilds and NVQ qualifications, and are helped to find work and mentoring on release.

The food was excellent, the service terrific and the highlight of the evening a speech by Pablo, a 40-year-old prisoner who admitted he had never done an honest day’s work in his life, but whose eyes had been opened to a different way of living, and one he was determined to embrace. Unfortunately I was unable to tape his speech, as visitors are required to leave their phones at the prison gates, but it was a brilliant, moving, heartfelt account of how the opportunity to learn and to work had the capacity to change one man’s way of thinking.

Ah, woof-woof the Pavlov doggers. Hark the liberal who always stands up for the criminal. Well no, I have always been in the ‘tough on crime, tough on the causes of crime’ camp. And yes, who can be absolutely sure that Pablo won’t go back to crime when he gets out? But the data on those who have gone before him are good; and you only had to hear him speak to have confidence in his ability to shape a different kind of future for himself.

So thank you Pablo, thank you Clink CEO Christopher Moore who told the whole brilliant story of the way they work, and thanks Group GTI for bringing together so many university recruiters. Between you you helped restore my faith in humanity and in good sense at a time both are being so badly eroded by Trump and hard Brexit, neither of which, like a prison sentence or a university course, need last for ever. 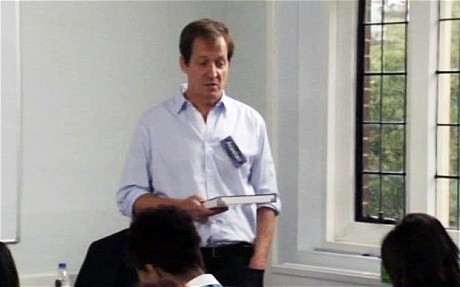