I was probably being a little churlish last night, on seeing the Guardian headline on my interview with Decca Aitkenhead – ‘you have to have at least the threat of military action’ – and tweeting that it had probably been written before the interview was filed.

As some of you quickly took to twitter to tell me, she did say she ‘loved the book’ we were discussing, my new novel, My Name Is …, and they gave plenty space to what it was about, and her views that I was now a ‘proper novelist’, ahem, and that my writing as a woman was particularly ‘compelling.’

So there you are – using my blog to rebut my own rebuttal (though I still think the headline writer was having a lazy day). In one of the many unreported parts of our chat, we discussed blogging, Decca having noticed I was doing less of it – true – and me saying that when I was doing it every day it was starting to feel like a chore and so I tended now to pick and choose. And of course rebuttal is one of the many good things this whole self-publishing thing can allow, whether on twitter, Facebook or here.

Rebuttal 2: Andy McSmith in the Independent – no criticism – has picked up on something I was quoted as saying in the Nottingham Post, in an interview I did about my talk at the Nottingham Playhouse tonight.

Here is the quote … ‘The huge difference is that we’re talking about chemical weapons, rather than weapons of mass destruction. When they weren’t there, some people suspected they had gone across the border into Syria. Now there is no doubt the chemical weapons are in Syria and have been used.’ And here is Andy’s headline: ‘Saddam Hussein bequeath arms to Assad? The idea is nonsense, as Alastair Campbell knows’

The first part of the quote actually doesn’t make sense. What I described as the huge difference between Iraq and Syria was that in the current situation there is no question that he has and has used WMD. I did make the point about people at the time saying weapons we had known to be there may have gone over the border, but certainly did not say Saddam had given them to Assad. And on the last part of the quote, the ‘the’ before ‘chemical weapons’ does not refer to Iraqi WMD’ but to those which were used recently in Syria.

— I know that Andy, a former colleague, will like many of us have been saddened by the death of the wonderful Geoffrey Goodman, who was a great journalist but more than that a lovely lovely man. Both the Mirror, our old paper, and The Guardian, from ex editor Mike Molloy, have published excellent obituaries which I would like to share here and here.

I would merely like to add to these terrific accounts of his life the remarkable personal kindness he showed to me and members of my family at various times, not least his help to my son Rory when he was studying politics, and would go to Geoffrey’s house to pick his brains and his books and his intimate knowledge of Labour and British history.

Press Clegg-bashing not helping Cameron. Debate should be on policy 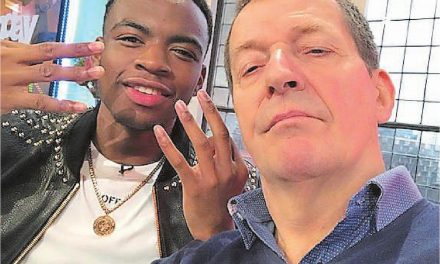