On three pictures of Clegg, Assange and Obama, and how conventional wisdoms can be wrong

Papers wise I have only seen The Guardian and the Financial Times today and my eye was particularly drawn to three photos. One of Nick Clegg (FT). One of Julian Assange (Guardian). One of Barack Obama (FT). And they made me think of conventional wisdom.

I can find none of the pictures online so you will have to rely on my wordsmithery to communicate what they communicate, or else grab the nearest copy of these two papers.

Conventional wisdom was one of the themes in my speech to the (hugely enjoyable)Irish Marketing Society lunch yesterday; namely that conventional wisdoms often turn out to be wrong, because they tend to be born of a media elite settling upon a view that is then perpetuated by journalists repeating it (often to each other) without ever thinking there might be another view held by a large proportion of the public. Rule One (of many rule Ones!) of marketing – don’t confuse media opinion with public opinion.

Conventional wisdom of Nick Clegg is that he used to be a hero and now he is a zero. I always thought the hero thing was overdone – wow, he strung a few sentences together in the first TV debate of the election, swoon swoon – and likewise the zero thing is overdone too, though perhaps not as much as the hero thing was.

So the picture of him on the front of the FT, had it appeared in the hero phase of his leadership, would have summoned up conventional wisdom descriptions of tough, rugged, good-looking, determined, modern (no tie blah), focused. He looks a little like Colin Firth, the actor who came out for him during hero phase and has abandoned him now that the zero hour has beckoned.

In the photo, illustrating a story in which he (again) warns that he will stamp his feet a lot, he jolly well will, about bank bonuses, he is looking down towards the ground. His lips appear tense, his face rather drawn. And now that he is thought to be struggling, he looks well, rather sad, a bit lonely, hunted even. I have no idea when it was taken but the same photo can provoke different reactions according to circumstances past, present and future. It is the conventional wisdom that we put upon the photo that changes, not the photo itself.

Mr Assange, relegated to a single column in the FT, needless to say appears on the front of The Guardian (current circulation director Mr W Leaks).

Fair to say there is no clear conventional wisdom surrounding Mr Assange, who has only recently become very well-known. To some, he is a fearless campaigner for truth and freedom of information. To others, including some who know him well, he is a rather odd and attention-seeking individual with something of a Messiah complex, an aggressor now able to pose as victim. To some, he is a  menace to good governance, whose irresponsibility will provoke damage as yet unseen, and to some (ott) Americans a terrorist. And to two women in Sweden, he is a sex offender nonetheless able to garner unconditional support from lawyers and others normally at the front of the queue to defend women against attack by men.

In the picture selected for the front of the Guardian you can see all those things depending on your point of view. Think freedom fighter and the tired eyes and unshaven chin say he never stops working for the truth. Think attention seeker and you wonder how he managed to keep his hair (he is the David James of information campaigners when it comes to changing his hair) so well coiffed in prison and whether the vest plus unshaven look was, well, a look; like the look he gave from the prison van in a previous Guardian frontpage shot. Think menace and he looks rather threatening. Think sex offence and he looks a bit seedy. But the point is the photo can challenge as well as vindicate whatever view people may hold.

The best conventional wisdom challenger is the photo in the FT of Obama visiting US troops in Afghanistan. I love it, and wish that I could show it here.

The current conventional wisdom of Obama is that he was a great candidate but has been a let down as president. A spin-off from that CW is that he has been weak on defence matters and is not popular with the military.

Yet the hope and enthusiasm in the eyes of the troops is every bit as powerful as the feelings which overwhelmed so many during his election. At the back, virtually everyone (apart from a member of his staff, the only non-uniformed person in the picture) is trying to get Obama’s picture. In the middle, everyone is smiling (apart from said staff member) We cannot see if Obama is smiling because he has his back to us, and a woman soldier is hugging him, her face a picture of sheer happiness . At the front, all around him and her, they have joy on their faces and love in their eyes. It rather cheered me up. I like it when CWs turn out to be wrong.

In an era of blandism, Boris’s blondism has a certain appeal, but now is a test of SERIOUS leadership 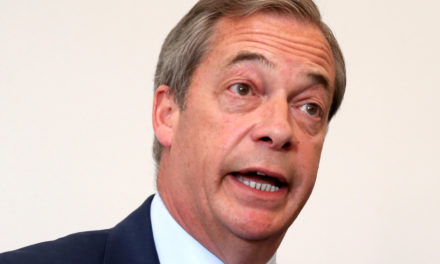