Highs feel better after so many lows

As I was saying … there is nothing quite like football; for anticipatory anxiety, stress during the game itself (not to mention FIVE minutes of injuty time) then joy overflowing in the moment of victory and the hours which follow it.

Nor is there anything like it for prompting a warm response from others and I want to start by apologising – for not replying to all of the texts, emails, facebook messages and tweets that flowed in last night after Burnley’s promotion to the Premiership.

I did try to, but there were pages and pages of them, Facebook alone going well into three figures, and I gave up after a while. Not everyone was wishing me happy birthday and saying well done Burnley. Like the tweet, clearly from one of my biggest admirers, saying he could not wait to see my face next year when Burnley get relegated and Labour lose the election. On verra, just as on verra whether all those ‘six points guaranteed for us’ messages from figures as varied as Piers Morgan (Arsenal), Andy Burnham (Everton) and Jack Straw (Blackburn) turn out to be a tad cocky.

Did I not say here yesterday that we would win 1-0? I wish I’d broken the habit of a lifetime and put a bet on it. But money could not buy the feelings of the 36,000 Burnley fans who were there yesterday, and the thousands who will turn out for the victory parade today.

It is partly because we have had so many lows that the highs feel so good. Founder member of the League, Champions in 1959/60, relegated from the top flight in 1976, almost relegated right out of the League in 1987. We used to be regulars at Old Trafford and Anfield and Highbury. Sudddenly Hartlepool, Chesterield and Darlington became the standard fare for Burnley fans.

And now we’re back. People kept asking if it was as good as the election win in 1997. But as I record in my diaries, maybe it was the stress or the knowledge of what was to come in starting a big new job the next day, but I did not enjoy the night of victory. Last night, I enjoyed every  minute.

We joined chairman Barry Kilby, manager Owen Coyle, some of the players and their families, for an impromptu celebration in a London hotel. Our goalscorer, Wade Elliott, just could not stop smiling. The event was enlivened by a group of Celtic players – their centre half Gary is brother of our captain Stevie Caldwell – who seemed to have learned all the Burnley songs in one day supporting the club.

Coyle, who really does have something a bit special about him, was looking after his 78-year-old Mum Frances. Some of the players may be waking up with sore heads, but not him. He is a lifelong teetotaler.

This evening they will be on an open topped bus taking in the applause of a town whose entire population could fit into Wembley stadium. I am really proud to have been asked by the council to MC part of the procedings. So not for the first Tuesday this year, I am heading north. I still can’t quite believe we have done it. 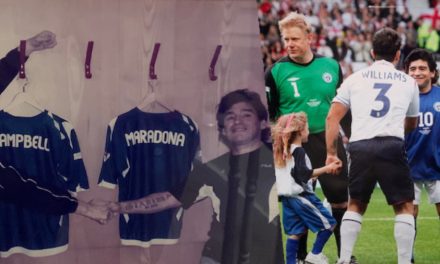 All hail Olli Issakeinen, the Finnish fib-watcher on Osborne’s case