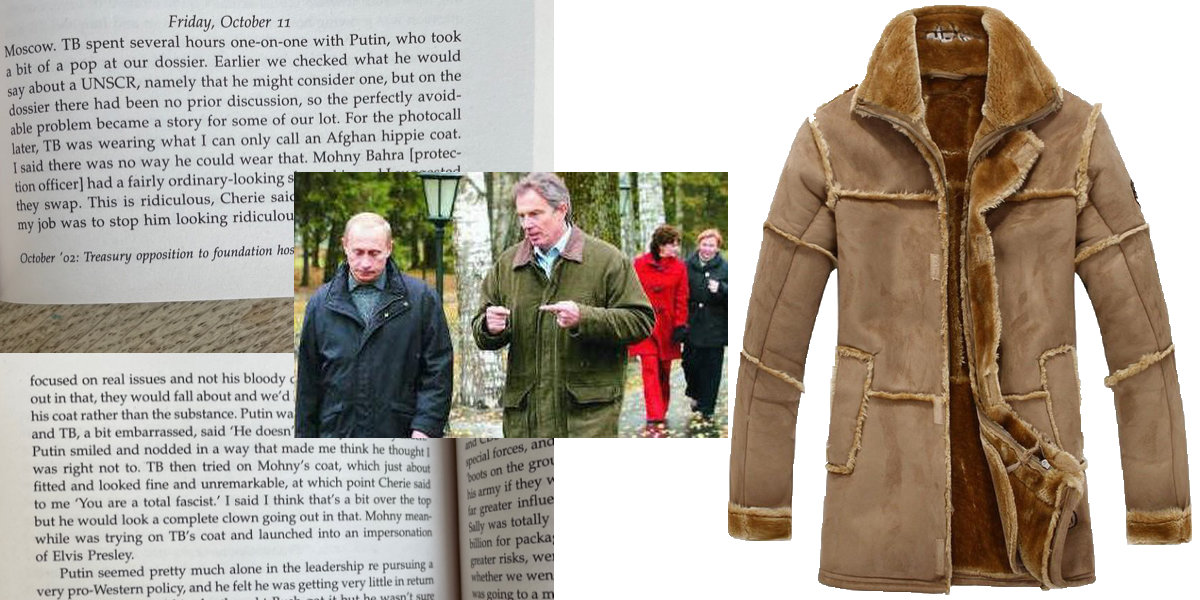 In an early episode of The Rest Is Politics, my new podcast with Rory Stewart, I told the story of an argument I had with Tony and Cherie Blair, about a coat. It was a row which escalated sufficient for Cherie to call me a fascist, and all in front of a bemused Vladimir Putin. The Rest is Politics have posted the pictures on their Instagram feed and are now running a Twitter poll.

Tony and Vlad had been meeting at Putin’s dacha and were about to walk through the grounds to provide some pictures for a media pack otherwise starved of access. It was cold. Freezing.

Cherie had packed a Paul Smith coat which I described in my diary as ‘Afghan hippie’ in style and I warned Tony that if he wore it, it was all the media would talk about. Putin looked like he agreed with me. Cherie was getting ever more enraged.

Anyway eventually I persuaded Tony to swap
his coat with Mohny Bahra, one of our special branch protection team who, on donning the Paul Smith coat, immediately launched into an Elvis impersonation.

Well, it turns out that Mohny, who I last saw in 2013, when he retired from the force, is an avid listener of the podcast. It also turns out he is better at keeping pictures of past events than I am. And he sent me two pictures – of both the coats. The one Cherie wanted Tony to wear. And the one I persuaded him to wear.

Now looking at them today I can see why Cherie was cross with me, and I can see why people in 2022 might agree with her. But this was two decades ago and I stand by my view that the media would have obsessed over the Paul Smith creation. That being said The Rest Is Politics Twitter account is doing a poll on which coat he should have worn – Afghan hippie or bodyguard Barbour – and I am expecting Afghan hippie to win. In which case I will apologise to Cherie. Though I hope she agrees Putin is somewhat closer to fascism than I am.

The story has a happy ending of sorts anyway. When the war in Ukraine started, and lots of appeals were launched for clothes and food and medicines, Mohny went through his old clothes to take a load to send to Ukraine. Among them the coat Tony wore. I am hoping it is being worn by a Ukrainian soldier. It is probably too big for President Zelensky. As it was for TB!!

Another funny story from that trip … Mohny was reminding me that at one point Tony and Vlad were driven off in a van with lots of Russian protection Officers and the UK protection team followed in a van behind. At one point the convoy stopped. It was dark. And suddenly two shots rang out! Mohny had visions of having to explain to London how he had let ‘the principal’ out of sight and assassinated!

It turned out Putin liked to see his food being shot! We later had a wild boar and a deer from the barbecue!!

Happy days. I am not sure any of us ever imagined that Putin would last so long, let alone become what he has become.

In praise of Stephen Fry, who should tweet or not as he sees fit