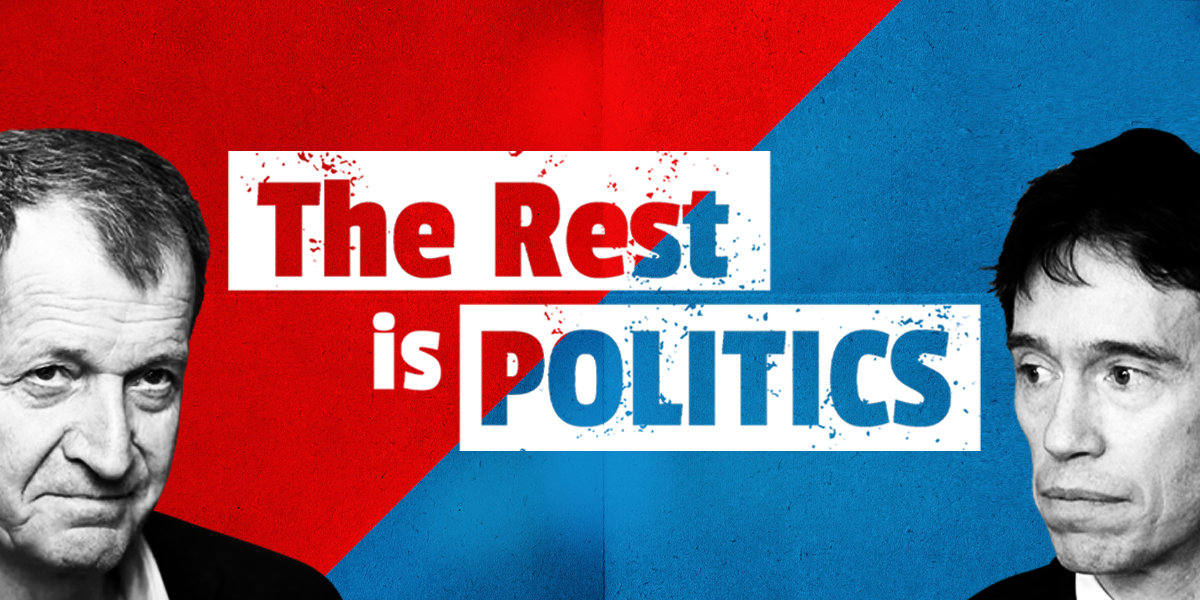 Now look … I am self-aware enough to admit to having a large ego, and to admit that I have a condition known as maladaptive competitiveness, which means if I do something, I like to do it well, and if it involves competition, I like to win. The Number 1 best-seller of a few years ago, Winners And How They Succeed, has more.

However, when I was approached by Goalhanger Productions to do a new political podcast, with a fellow presenter from a different political tribe, and we settled on former Tory Cabinet minister Rory Stewart as the ideal choice, I did not for one moment think it would become a chart-topper. But it has, and not just the political charts, but the whole podcast caboodle charts. It was bouncing at or close to the top from Day One, but according to fellow political podcaster Iain Dale apparently that has something to do with the way algorithms assess new podcasts around its launch. But last week, after Episode 3, it went to No 1 on Apple’s charts on the day it came out, and stayed there all week.

Yesterday, in the sunshine in London’s Golden Square, I was sitting having a cup of tea with my friend Rachel Kinnock, who can testify that during the time we were there, four people randomly came up at separate times to say they were enjoying the podcast. This morning, in the lido, a woman swimming towards me in the next lane said the same thing. And I just had a message from a Tory MP who said “your podcast seems to be hitting the mark. Someone mentioned it in my local pub.”

I think Rory and I are both a little bemused by this. And this biog is to some extent the product of one of the lessons in Winners, courtesy of Marilyn Monroe, who once wrote a wonderful poem, Think In Ink. So in addition to writing this in the hope more people will check out the podcast, I am also trying to work out why a lot of people already do. The comment of my fellow swimmer as to why she liked it is a good place to start. “It is so nice to hear two people discuss politics intelligently and disagree agreeably.”

Back to self-awareness … I can be very argumentative. As I told Rory last week, “Lord” Charles Moore once described me as “the most pointlessly combative person in history.” I find it very very hard to say anything remotely positive about the current Prime Minister, and anyone reading my political tweets might think I was in a permanent rage about Johnson, about the state of our politics and the state of our political and media culture. And they wouldn’t be far wrong. But from the days when I was a political journalist back in the 80s, I have always enjoyed debating with Tories, and there have been many Tories down the years I have respected even when I have disagreed with them. That is how it should be. It is the nature and the quality of the current PM and the current government that make it so hard, and fuel the rage so much.

There are three other factors which have been mentioned by some of our social media commenters, which might explain why the podcast has landed as it has. First, that though we are both identified as being of and for our parties, we have both been expelled, and though I think Rory finds me to be instinctively over-loyal to Labour, I do think it has given us both an independence that he never had as a minister, and I never had as the spokesman and strategist for Tony Blair. Second, we have both been involved in politics at a high level, and while I sometimes worry I bang on about those times with TB too much (though I try to do so in a way relevant to issues today,) people seem to enjoy the reliving of them, not least through the brilliant little film clips made by Goalhanger’s 20-year-old social media whizz, Vasco. And the third is that though we have both gone on to different things, we have stayed active in terms of both following, and trying to stay engaged in, current political issues home and abroad.

So we recorded the new episode out this morning minutes after Rory landed back in Jordan from Baghdad, and discussed Iraq. I had been talking to Belarus Opposition leaders, and Pavel Latushka’s piece for The New European calling on the West to be tougher on dictator Lukashenko formed part of the discussion about Ukraine. With the spring statement today, we had a good chat re the relationships of PMs and Chancellors, past and present, and one of my stand-out moments was learning that Rory used to share a desk in the Commons library with both John McDonnell and Rishi Sunak, and that “I never managed to charm either of them.”

We get loads and loads of questions sent to us through the week and on each episode we are trying to take a few of those. So that led to discussions on Nazanin Zaghari-Ratcliffe, and on the way the government whips operate.

Anyway, all in all, we are enjoying it, and we are pleased lots of others seem to be too. With PMQs on in the background, I think another reason we may be striking a chord is that people are sick to death of Johnson’s lies, smears, bullshit and bluster, and his belief that his job is all about three word slogans and glossy photos.