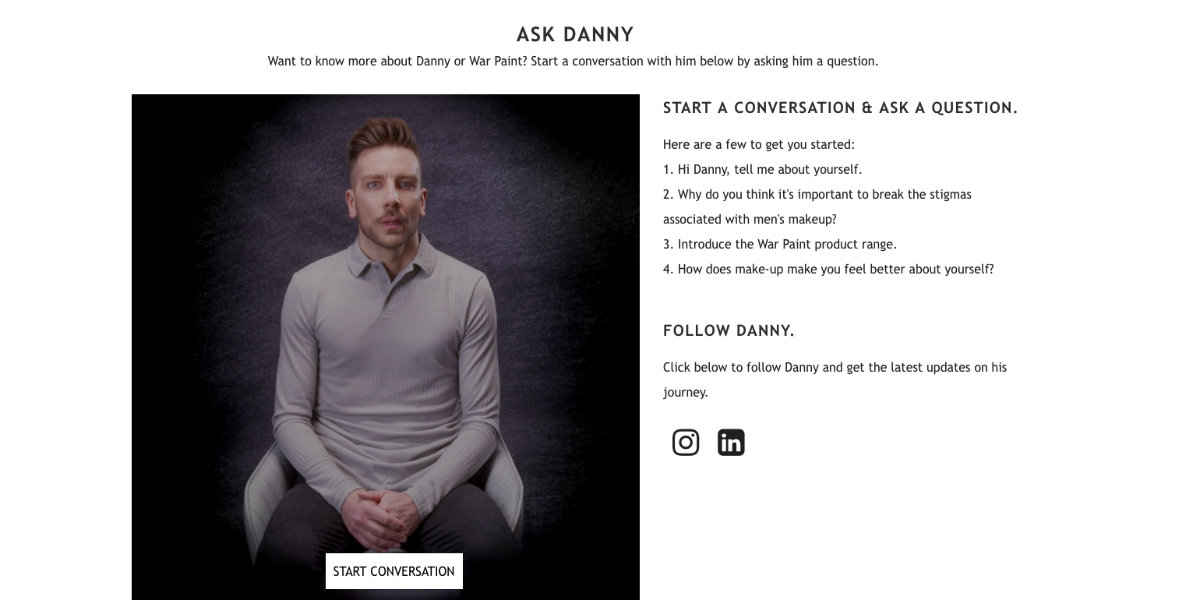 ‘It always seems impossible until it’s done.’ One of my favourite quotes from one of my favourite ever people, Nelson Mandela, the only man in whose presence the hair on my neck stood to attention every time I met him.

‘My Goodness why didn’t I think of that?’ Another of my favourite quotes. OK, not Mandela, but memorable too, from the mouth of Hank Scorpio in, wait for it, The SImpsons.

Both sprung to mind when I met for the first time a young entrepreneur called Danny Gray.

I get a lot of cold calls from all sorts of people, but something about the urgency and the passion in his email, and then the call I placed, told me he was definitely worth meeting.

When he explained his idea in full, Hank Scorpio’s quote leapt at me … why on earth has nobody thought of this before? Then Mandela’s quote. Because one of the current ‘seems impossible’ situations I am involved in is trying to win the fight for proper parity between physical and mental health, trying to persuade politicians and policy-makers that if only they would shift from having a Mental Illness Crisis Service, which is what we have now (inadequate and patchy at that), to a Mental HEALTH Illness Prevention Service, they would over time save money, and we would be a happier, healthier country. If other countries followed suit, we would be a happier, healthier world. Seems impossible … until we do it.

So first let me tell you about Danny, and then about his, in my view, game-changing idea.

Danny established War Paint, make up for men, as a direct consequence of his having been bullied at school aged 12 because of his sticky-out ears, which led him to become obsessed with his appearance, addicted to changing it, to the point where he developed chronic body dysmorphia. I learned more about the condition in a few hours talking to him than I had in 64 years on the planet.

Once Danny got War Paint up and running, and talked about his condition, he was inundated by people asking for his advice. I get the same, daily, about depression, having talked so often for so long about my own battles with it.

Because he found he couldn’t answer every question and every demand for advice and information that came his way, Danny had the idea for JAAQ. It stands for Just Ask A Question. It is a brilliant idea, with the help of some wonderful people, especially tech wizards, we have turned it into reality, and Danny launched it on The One Show and Good Morning Britain last week. Within two days, 50,000 people had used it.

So what is it? It is a website. You go on there and you can ask any question, and get an answer from a real person in seconds. One of the real people might be me, if your question is on depression; Danny if it is on body dysmorphia; actor David Harewood if it is psychosis. They are the three conditions we have focused on to start, and we will now broaden it (any wealthy people out there who want to help a not-for-profit start-up that can change the world, let me know. The more money we raise, the more we can do, and the more we can develop the technology.)

Next up … comedian Jimmy Carr and my daughter Grace, also a comedian, are both up for talking about anxiety and panic attacks. Actor/writer/director Adam Deacon is up for doing bipolar. But this is no celeb-fest. Because alongside each of us is a world-leading (genuine, not the Boris Johnson version) medical or psychiatric expert to give advice and information.

And do not imagine it is just for people with mental illness, or fears of mental illness. I think it will be just as helpful for friends and family and colleagues who are worried about someone, but don’t know how to help. Apparently the question I am being asked most on the platform is about the role of family and friends … what helps, what makes it worse, what is the right thing to say, the wrong thing to say?

The average length of time between someone developing mental health problems and having them properly addressed is ten years. That is not merely, nor even mainly, because of lack of resources, hugely problematic though that is after a decade of austerity and now with a Prime Minister who didn’t even mention mental health in his Tory Party Conference speech last week. It is because people, and especially men, often do not like to admit to the problem in the first place. Maybe they don’t want to upset a parent, or worry a wife or child. They don’t want to tell a boss or colleague, for fear it affects their employment and promotion prospects. They don’t want to tell friends, because they worry they might not understand, think they are ‘weak,’ see them as ‘banter fodder,’ or not know how to react at all.

But they might just go onto a website to talk to a ‘stranger’ who is also however a familiar face, or to an expert who knows the field inside out. That is what JAAQ provides.

JAAQ will not replace proper treatment. But I am convinced it can help people decide if they might need it; and even more convinced that it will help people get access to strategies and coping tactics that might prevent them needing to get professional help at all. It is free, easily accessible, even I can work the technology, and the feedback we have been getting has been humbling.

Just to explain how it works … you sign in (and stay signed in thank God, so none of that password/sign in again/Face ID bollocks, and you don’t even have to give your name, phone or email); you click on one of the conditions; then you open a conversation with one of us. There are suggested questions to ask, but you can ask your own. We have all spent hours in front of a camera recording an answer to hundreds of questions. When you ask yours, the algorithm quickly digs out the answer closest to your question, and replies within a matter of moments. If you ask me ‘what did you watch on telly last night?’ I will reply ‘Sorry, I haven’t recorded an answer to that question. Try asking me something else.’ But anything on depression, you will get an answer. You can also watch an individual just run through every answer recorded.

Please check it out, and send it to friends and family, especially if you know they or someone in their family is struggling.

Danny and I have done loads of media on it, with more to do, including this morning at 1145 on Sky News. We are also lined up to talk to NHS administrators later this month. But if I was Health Secretary Sajid Javid, the new mental health minister Gillian Keegan, or any of their devolved equivalents in Scotland, Wales and Northern Ireland, I really think they should check it out, and work out how to use it as part of their mental health policy. I would say the same for schools, businesses, prisons, anywhere you can think of where people might need help, advice and information, and could find it on a screen, or a phone or laptop.

Danny is putting a JAAQ hub in his Carnaby St War Paint store, and the first JAAQ van is out on the road. Van pulls up, you go inside, you talk to someone on screen. Coming to a street near you!!

If I sound excited about it, it’s because I am. I honestly believe Danny has come up with a game-changer, and I am so proud and pleased that we have turned it from idea to potentially game-changing reality in a matter of a few months. Did I say it was brilliant and you should check it out? Here it is again. Off you go. Tell your friends. Copy and paste. Share and send.

On Owen Coyle and Brian Laws

They got their kit off – so you get your cash out