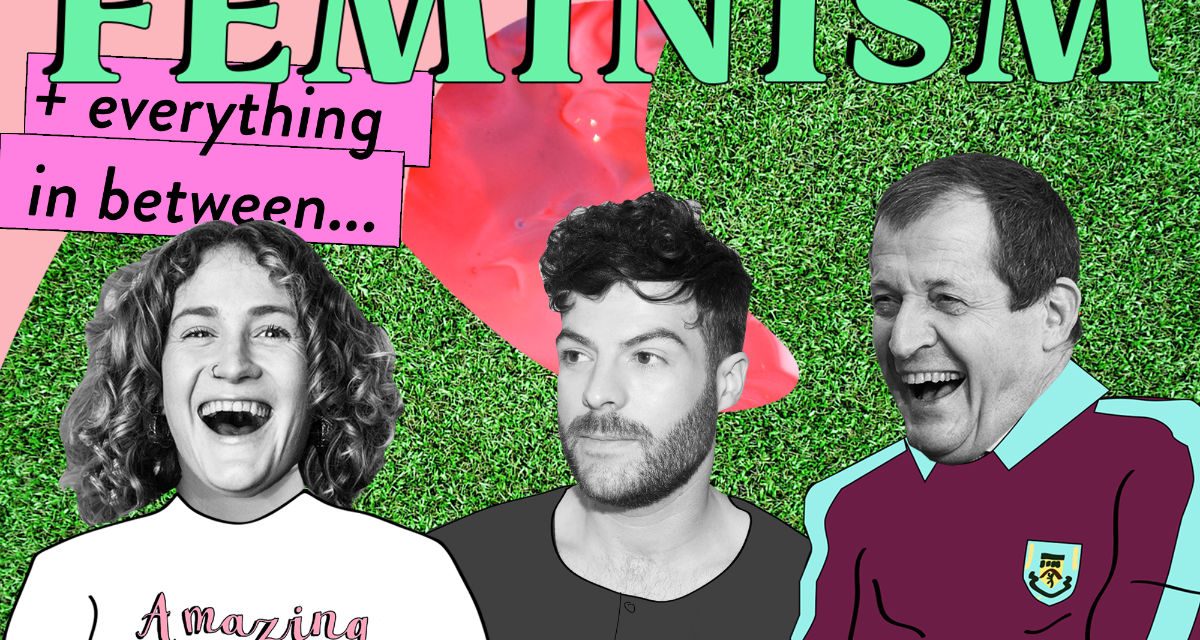 If you’re not interested in football, or more specifically football fandom, look away now, for this is not for you. But I am nothing if not competitive, and when I feel my football fandom credentials challenged, I feel I have to fight back. Maladaptive competitiveness is a known medical condition. Add it to the list, greedy insurance companies.

As you may know, I do a podcast with my daughter Grace, called Football, Feminism and Everything In Between, and, after a hiatus of a few months, Series 2 launches in the morning, and our guest is Radio 1 DJ and I’m a Celebrity Get Me Out of Here runner-up 2021, Jordan North.

I know Jordan less through these activities – I can proudly say I have never watched a single second of I’m a Celeb since it started, nor of Big Brother except if it was on the news, and I have turned down large sums from both and from many more reality TV shows in order to maintain pristine purity in my old fart view of them. But I do know Jordan as a Burnley fan, and it was in that capacity that he became something of a national treasure in the recent series, when he spoke of Burnley’s Turf Moor stadium as his ‘Happy Place.’

The club shop has done a new line in ‘Happy Place’ merchandising. During a game while he was inside the I’m A Celeb castle, the club did a pitch side perimeter advertising message wishing him luck. There is a ‘Happy Place’ poster with his 30-year-old mug on it outside the stadium. He interviewed the new chairman Alan Pace for BBC’s Football Focus. The papers did tons on his love of the club, and its role in getting him through some of the tasks to which he had been challenged.

This has led to people, among them my own daughter, suggesting that I have been supplanted as the holder of a title that has been applied to me many many times down the years, namely ‘Burnley’s Most Famous Fan.’ Of course fame, like beauty, is in the eye of the beholder, and technically, given Prince Charles is more famous than both of us, and has pronounced himself a Burnley fan on account of the work the Prince’s Trust does in the area, he is the clear winner if fame alone is the qualifying factor. However, though he has been to Turf Moor, Charles has never been to a match, almost certainly couldn’t name the team that last got us to the FA Cup Final when I was four, has probably never even heard of Ade Akinbiyi, and has no sense of the cultural, social and historical significance of Robbie Blake’s underpants. So I’m sorry, Charles, you can have your HRH title, but you’re not having mine.

You see, it is not just about fame, but about the fandom part. And even on fame alone, though I accept Jordan has three decades in which to catch me up, I think I nick it. Lots of the Yoof and the reality TVers might know Jordan more than me, I dunno, but have they heard of him in the White House, the Kremlin and the Elysee? More importantly, did he ever play with Maradona? I don’t think so!

But let’s say we were equal on fame alone – then the decider has to be … who has actually been more dedicated to the club over the course of their life? And I would argue that merely the fact of his going into I’m A Celeb – DURING THE FOOTBALL SEASON!!!! – disqualifies him. He says on the podcast that he tried to bribe the security people to find out the scores, but honestly, so what? If it had been me, I would have bound and gagged them, stolen their keys, escaped, got to the game, and smuggled my way in. And, as some of the papers report today, when finally he got out, his Mum told him Madonna had died while he was away. When your Mum confuses Madonna and Maradona, and you don’t mind admitting it, sorry, but you’re not a proper fan. I never played with Madonna by the way.

He also gives it the big one about his home game rituals in the pub, and takes the mick out of me because I might occasionally have found my way into the very comfy seats in the Turf Moor directors’ box. But everybody knows – everybody – that the real way to judge fandom is by answering this simple question … ‘how many away ends have you been in?’ On the podcast, he witters on about a cold night in Grimsby. We’ve all done that, mate. What about Carlisle, Hartlepool, Stockport, Maidstone bloody Town? Did you even know we have played at Maidstone Town?

Of course it helps, though it didn’t feel like that at the time, that when I started following Burnley, we were league champions, and within a quarter of a century, we were at the bottom of the fourth division and one game away from going out of the Football League. It all means that I have been to every Premier League ground, every Championship ground, and all but nine of the grounds in Leagues One and Two (almost all of them because they were not in the same league when we were down there.) So that’s 83 current League away ends. There are then 14 grounds I have seen Burnley play in, against clubs which were in the league but no longer are – Aldershot, Barnet, Bury, Chester, Darlington, Halifax, Hartlepool, Maidstone, Newport County, Notts County, Stockport County, Wrexham, Yeovil and York. So now I am on 97.

I freely accept this is not a record that everyone would be proud of; and also that it might suggest I have devoted too much of my time, energy and money to following a football club.

But true football fans, which sadly does not include my daughter, will know that Mr Jordan Happy Place North will never ever get near it, not least because we are unlikely to plummet down the league in the way we did in the past, but also because he clearly just doesn’t have the desire to get the ton. All that being said, he is a good bloke, and it is a good listen, and I promise we talk about a lot more than Burnley FC, of which I am Numero Uno Tifosi, ovi!