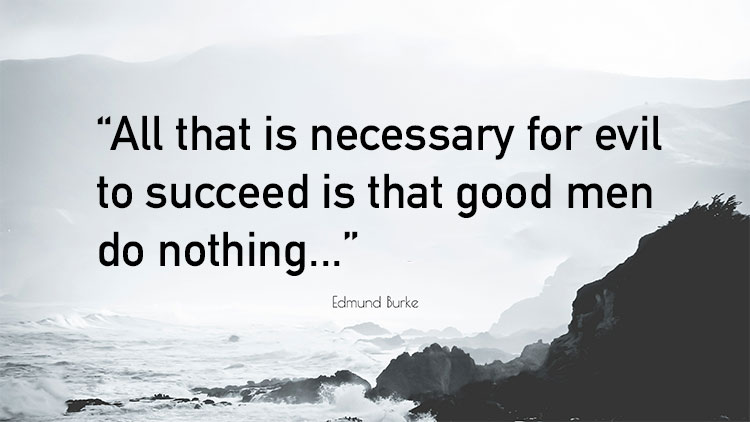 ‘All that is necessary for evil to succeed is that good men do nothing.’ These words, most commonly attributed to the 18th Century Irish-born Whig Edmund Burke, may have come from someone viewed by some on the right as the father of modern Conservatism; but they rank among  the most inspiring phrases for progressives ever written. Universal suffrage, racial equality, gay rights, improving the health and life chances of the poorest in the world, any great campaign has required large doses of the wisdom in that sentiment to prevail over the twin scourges of indifference and fatalism.

I mentioned recently that I have been reading Laurence Rees’s book on the Holocaust, a story which ranks right up there in the annals of triumphs of evil over good men doing nothing. There were so many steps along the way, points at which people who would define themselves as good, and be defined by others as good, just turned the other way, hoped things would not end up badly as they feared. Well, we know where than ended.

We can moan all we like about Donald Trump being President, and in every corner of the earth there is a lot of such moaning going on right now, but he is President and he was put there not just by those who voted for him, but by those who didn’t vote at all; who thought that their votes make no difference, because their lives will never change no matter who is in power. Those lives are changing now. Meanwhile Trump is being aided and abetted by Republicans who say privately he is a disaster, and a danger to the Republic, but publicly do nothing to prevent him from pursuing his evil ways. I am not saying he is Hitler. I am saying he has distinct nationalist authoritarian tendencies, and that there are too many parallels with the 30s right now, and we should be wary.

We can moan all we want about Brexit, as I do, and shall continue to do, in the hope we can prevent it from happening, and doing the damage most of us, from Theresa May downwards, know that it will. But we can all of us ask some very hard questions of ourselves, from David Cameron downwards, about actions past and present that led it to coming about. One of those questions again relates to those who did nothing.

It is often said that there has been no significant shift in opinion since the referendum, that the country remains more or less divided the same as it was, split down the middle. But actually, given the Government, the Opposition, and most of the media are united in saying Brexit is a question of when not if, it is pretty remarkable that in so far as there has been a shift, it is against Brexit. Even the high priests of hard Brexit argue not that the public are clamouring for it, but that they ‘just want us to get on with it.’ Also, one of the most interesting things I have seen in the welter of polling on the issue, is that when you ask those who did not turn out in the referendum which way they would vote if there was a vote on the final deal, it runs around three to one against Brexit. Perhaps that is why the Brextremists are so worried about the idea of the people, or Parliament, having a real say.

In the current Brexit debate, I am putting Andrew Adonis very much in the ‘good men’ category, though like a lot of people he wishes he had done more in the referendum campaign itself. He is certainly making up for lost time, with, in addition to playing a prominent role in the Lords, a nationwide tour, including of some of the places which voted most strongly in favour of Leave, a book against Brexit out soon, a column in The New European, and pretty relentless social media activity, with the BBC (Brexit Broadcasting Corporation as he calls it) often in his sights.

This last part of his anti-Brexit portfolio has divided Remainers, as have I with similar attacks on the BBC coverage. Not least because of my history with the BBC, dating back especially to the Iraq War, I have been pleased that Andrew has joined the fray with such gusto. You can get a flavour of his thinking in this New Statesman piece.

The two things that leapt out of the page at me were both towards the end.

First, this from Andrew …

‘Adonis feels some of his allies against a hard Brexit aren’t up for the fight. He divides the Remain contingent into two groups:

“The Snowflake Tendency, who think it’s all over and we should roll over – and the Resistance Tendency. I’ve essentially become leader of the resistance without quite realising,” he says, telling me that he sees his fellow Labour politician, the shadow Brexit secretary Keir Starmer, as “the leader of the Game Over Brigade”.

“[It’s] one of the big debates taking place in Remain,” he says. “And the BBC thing in the past week has defined it, because I’ve been flooded by snowflakes telling me I shouldn’t be attacking the BBC because it’s a great liberal institution.”’ Join the club. But this snowflake approach is a terrible mistake, not just for supporters of the BBC, but for the institution itself. Of course it is a great institution. But it has allowed itself to be cowed by a mix of the ideological and the weak. The ideological who believe in Brexit. The weak who fear the wrath of the right-wing press agenda, and a Tory government that can exact revenge whenever the BBC Charter comes up for review. Years of being accused of being left-wing when they are anything but has made them over compensate.

Whether through John Humphrys and the Today programme, or the news judgements of BBC editors with an agenda against stories deemed ‘bad for Brexit,’ as I said in this previous blog, or Andrew Neil, perhaps their most intelligent political presenter, whose colours have been showing pretty clearly in his evident desire for the Cambridge Analytica story to fall apart, or Robbie Gibb making the effortless transition from a senior slot at the Beeb to Theresa May’s right hand, nobody can say the Brexit agenda does not get a fair hearing.

And here is the second thing that leapt out at me from the New Statesman piece. The BBC line …

‘We reject the suggestion that our coverage of Brexit is biased. We continue to feature a wide range of different voices, including those who are opposed to Brexit. The BBC is no longer reporting on the binary choice which faced the electorate in the referendum but is examining the Brexit negotiations and the impact of Brexit on the UK and the wider world. All of our journalists are subject to the BBC’s editorial guidelines and impartiality requirements.’

Sentence one … Of course they reject accusations of bias. How could they possibly admit them? Then take a look at sentence two, and ask yourself how it came to pass that Nigel Farage is second only to David Dimbleby in terms of Question Time appearances over recent years when someone like Andrew, who was a Cabinet minister never afraid of debate, has appeared once in his long career? And how has it emerged that barely any BBC package on Brexit can be made without reference to the views of Jacob Rees-Mogg?

The key sentence is Number three … ‘The BBC is no longer reporting on the binary choice.’ At last, they admit it. It is not a question of IF but WHEN. That is BBC policy. But that makes the BBC part of the government. Brexit means Brexit. At Any Cost. Yet Parliament has not had the say it has been promised. The terms on which the UK may leave have not been agreed. What if, in ‘examining the Brexit negotiations and the impact of Brexit on the UK and the wider world’ there is evidence to be reported on that impact being negative? What if that led to political and public opinion wanting a say on the final deal, as is entirely feasible and would also be entirely democratic, no matter how often Humphrys and Co say it wouldn’t. The BBC’s role is to cover the debate, not say where the debate ends while it is still going on.

‘The BBC is no longer reporting on the binary choice.’ Really? So when David Dimbleby said at 10p.m June 23 2016, ‘we’re out,’ was he delivering the BBC line, obeying orders? We weren’t ‘out.’ We had voted to Leave, and there would follow a long and complicated process, whose end point and implications were far from clear. It is not the BBC’s role to act as an echo chamber for a government. Sadly, on Brexit, that is what it is in the main doing right now. There are voices within the BBC, privately, saying so. They need to find a spine too. If they, either the ideological or the weak, seriously think the hard right forces now pushing hardest for hard Brexit will protect and nourish the BBC once their work is done, they are naive in the extreme. Far from saving them, their supine stance on Brexit could be the destruction of them. And the weak in the mix will have nobody to blame but themselves.