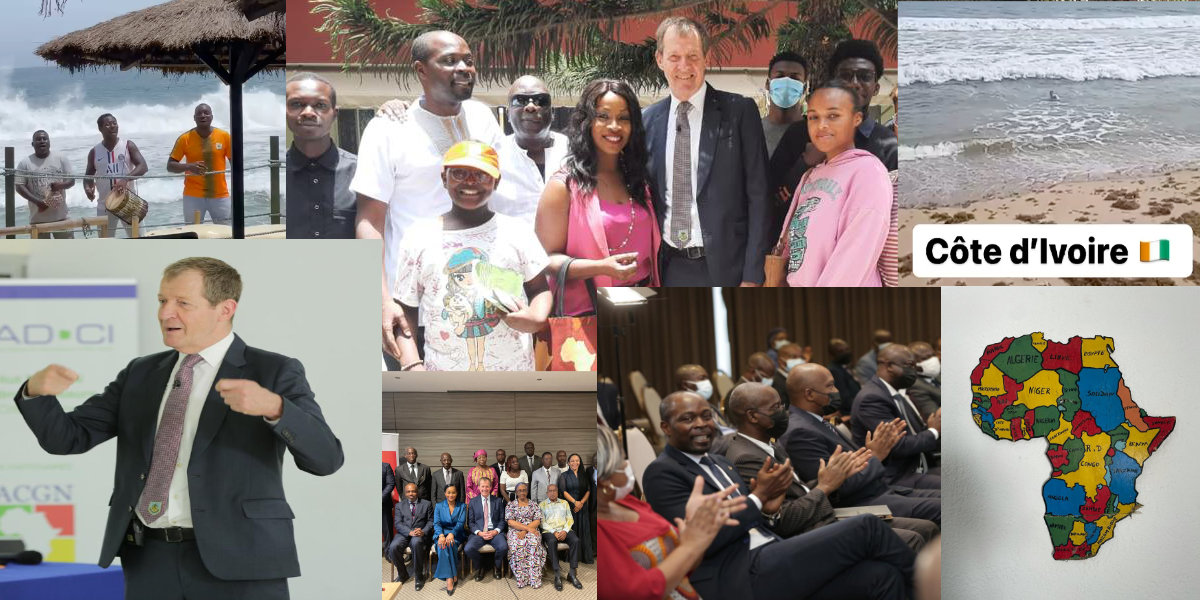 If you follow me on social media, you will know I have spent recent days falling in love with a country I had never visited before, Côte d’Ivoire. Hot without being unbearably so; warm, friendly people; beautiful, elegant women; great food; fabulous trees – see my recent Tree of the Day entries on social media – though real concerns about deforestation; great music, and I was lucky enough to meet John Kyffy, an Ivorian signing star who has worked with U2 among others, and whose music is really worth a listen; I was even luckier to get the most remarkable welcome at a beachside restaurant, three guys singing what I can only describe as a rap/reggae “Salut Campbello!” special composition; afterwards one of the nicest sea swims I have ever had, though it was only after I came out that I noticed the “baignade dangereuse” sign which perhaps explained why I had the wild, wavy waters all to myself; infrastructure way better than I expected, though traffic jams in and out of Abidjan pretty constant; poverty yes, plenty of it, and far too many kids unable to access education, but in general, everywhere, including in the poorer areas we visited, a sense of aspiration and a really powerful positive energy. I would definitely go again.

Religious conflict seems to be less intense than in other parts of Africa. I even learned a new word – “bi-réligieux,” bi-religious people who swap between Islam and Christianity, go to the Church as well as the Mosque. Professor Ahmed Legrouri, Provost at the Grand-Bassam International University, where I did a session with students, is from Morocco. He said: “Côte d’Ivoire is blessed that religion is not as dominant or as divisive as it is elsewhere.”

Of the many facts and figures thrown at me, one above all will stick in my mind … 24percent of the population are classed as “foreign/immigrants.” Yet social cohesion is strong. The minister of communication, media and francophonie, Amadou Coulibaly, told me that whenever he speaks to European politicians, “the idea of one per cent sends them into a panic. We have this melting pot approach, and it seems to work.”

Seeing foreigners as potential allies, rather than merely as an irritant or a security threat, might be helping too. Home Secretary Priti Patel should think about a visit.

At the grandly titled “strategy masterclass” I did with people from business, politics and public administration, one of the challenges I set was for them to devise a strategy to increase Côte d’Ivoire’s diplomatic influence at home and abroad.

Inevitably it led to a discussion of hard and soft power. My main host for the trip, Ted Azouma, executive director of a group called INAD-CI, (closest UK equivalent the Institute of Directors) argued that the only pillars of power that count are economic and military. The Ivorians love a good argument and that one got them going, given that they are doing not bad on the first pillar, with steady seven per cent growth, but are not seen as a military force.

I went round the room, asking people to name countries that best captured the right balance between all the things that go to make a country’s reputation. In no particular order (though with Norway getting a lot of nodding heads when it was proposed by one of the participants) the very different countries that survived our process of proposal and discussion were … Norway, Singapore, Rwanda, Costa Rica, Switzerland, Finland and Canada.

There are no firm conclusions to be drawn from what was a fairly random process. But it was at least noteworthy that the top six countries in the recently published Brand Finance Soft Power rankings  – the US, the UK, Germany, China, Japan and France – barely figured in the discussions. Of Brand Finance’s top ten, only Canada and Switzerland got a look in with my group.

The team which had been set the task of producing a strategy for Côte d’Ivoire got it down to two words … visibility and credibility. Their seeming dismissal of the major powers would suggest that in this area at least, “the big guys” are high on visibility, low on credibility.

With Rory Stewart just back from Rwanda, and me in Côte d’Ivoire, we were able to swap notes in last week’s discussion for our “The Rest Is Politics” podcast about how the Ukraine war was being seen in Africa. We had both picked up, if not exactly pro-Putin sentiment, certainly something of a “plague on both your houses” with regard to Russia and the US and Nato allies. Many parts of Africa have been subject to Russia’s aggressive information and disinformation strategies, and the Kremlin would have been pleased by the comments I received from some, that the US provoked Russia into the invasion.

The problem of fake news and social media polarisation is such that comms supremo Amadou Coulibaly told me they were planning a major campaign of media literacy education in schools and across the country. And one of the best questions I faced was from government adviser and strategist Christelle Meledje, who moderated several of my sessions. Referring to the way populism had developed, she asked: “Can we even say there is an objective truth any more?” Big question … Putin, Trump, Johnson, Brexit, the climate debate, to name just a few of the people and things making that question harder to answer with a clear Yes.

Tony Blair’s Institute this week published an interesting paper on the challenges posed by Putin’s information wars. It spoke of a new digital iron curtain imposed by Russia post-invasion, and the need for a new global digital alliance, independent of individual governments, to counter what the Russians were doing to ensure their people were shielded from the realities of what was being done in their name in Ukraine. The main point was that the Russian people alone can really bring an end to Putin’s violent expansionism. But as the Kremlin has virtual control over what they see and hear, his opponents have to be far more imaginative in how they break down that curtain, and get a more truthful picture of the consequences of his actions into Russian homes.

Not easy, but it has to be done. And a truth we all have to face is that right around the world, Russia and their populist apologists stole a march in the field of the new information wars, and we are still struggling to catch up.

My visit was organised before a date for Burnley’s home game against Everton was set after an earlier postponement. It meant me missing probably the single most important match of the season as we and Everton fight relegation, what a friend called “a veritable 16-pointer.”

When I learned that our Ivorian player Maxwel Cornet was in the starting line-up, I got the INAD-CI President, Viviane Zunon Kipré, to send him a good luck message. The fact that she dyes her hair a light shade of claret, was wearing a dress patterned in claret and blue, and was willing to identify as a Burnley fan, urging Cornet to play well not just for Burnley but for Côte d’Ivoire, added to the force of the message.

Outcome? … Cornet scored our third and winning goal with five minutes to go, prompting me to leap upon random strangers in the Abidjan bar where I was watching. I am not taking all the credit for the win. Maxwel, the other players, manager Sean Dyche and his coaches, must surely get the lion’s share. But Mme Kipré and I are claiming an assist, for sure.