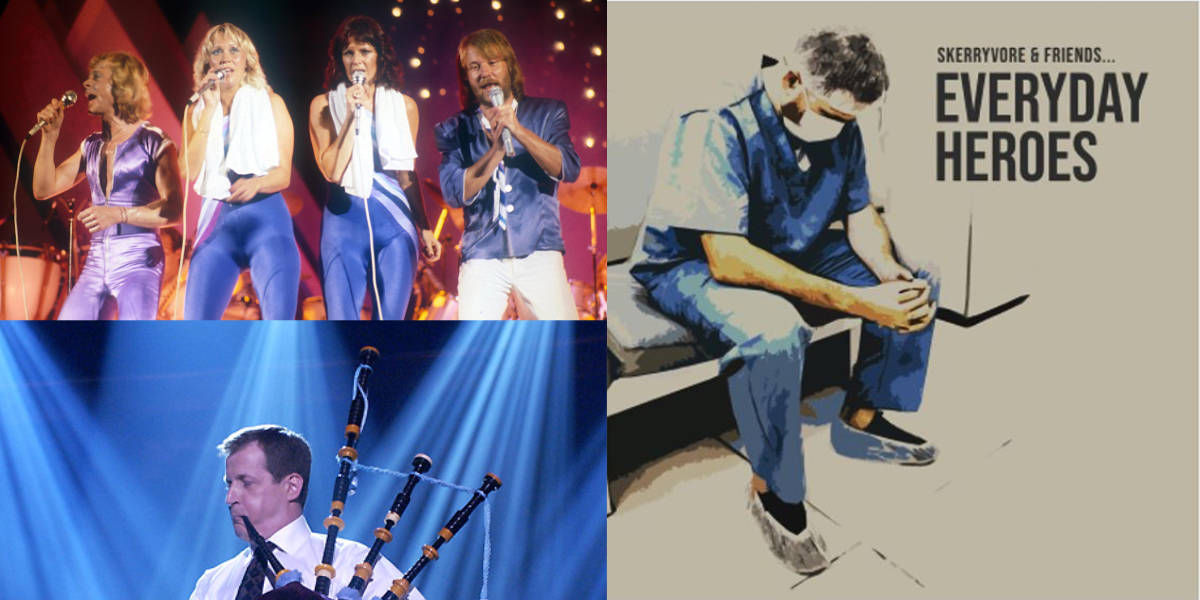 If you’re not a regular reader of The Article, (I recommend it) you will have missed this, which I would say of the many many pieces I have written since lockdown, is my favourite …

It is time for ABBA. It is, frankly, always time for ABBA, but it is especially time for ABBA in times like these. As with all great artists, from Shakespeare to Sondheim, the Beatles to Jacques Brel, ABBA have something to say about everything. I speak here as someone who, as a Cambridge University modern languages student, wrote an essay on ‘the influence of 19thCentury French literature on ABBA lyrics.’ Pretentious, moi? Or was I, as my tutor assumed, prenant le piss, as we polyglots say?

It was in this week forty-six years ago, April 6, 1974, that ABBA entered all of our lives, literally exploding into global fame when winning the Eurovision song contest with Waterloo. But it is the lyrics of another great song that keep popping into my head, and providing hope, comfort and inspiration, as one lockdown week rolls into the next …

Thank you for the music, the songs I’m singing,

Thanks for all the joy they’re bringing,

Who can live without it, I ask in all honesty,

What would life be?

Without a song or dance what are we?

Thank you for the music,

For giving it to me …

True ABBA aficionados like me will know it was first released on an album, funnily enough called ‘The Album,’ in 1977, then as a B-side, (remember those) and was only released as a single in 1983. But I knew the first time I heard it that it was going to become one of the great pop songs of all time.

Indeed, as fellow students may recall, when the song was released half way through my time at Cambridge, when I was 20, I immediately translated the lyrics into French and German and would boom them out drunkenly in my favourite pub, The Mitre.

My French lyrics went as follows …

For the German version, I had to change the lyrics slightly to get the three line rhyme … Ehrlichkeit, Zeit, bereit… but I hope Abba will allow this adaptation without resorting to copyright and intellectual copyright lawyers …

I was clearly ahead of my time, because in 1980, ABBA released an album, Gracias Por La Música, with ten of their songs translated into Spanish, which was huge in South America, and stayed in the Spanish charts for 21 weeks (more than five times longer than I have already been in lockdown.) It included the title track, Gracias Por La Música, (easily understood I hope), but also Fernando, Chiquitita, Mamma Mia, Ring Ring (no translation required,) and Reina Danzante(Dancing Queen,) Estoy Soñando, (I have a dream), and my favourite on the translation front, Conociéndome, Conociéndote, (Knowing Me, Knowing You.) Check it out, all of it, it’s brilliant.

Almost six hundred words in, and I still haven’t got to the point … the trouble is, get me going on ABBA, and there is a chance I will never stop.

So, the point … the point is that music really matters when life is tough.

Exactly a month ago, in Italy, the first European country forced into virtual lockdown by the coronavirus, an initiative was launched in Rome which swept the whole country. Brass collective Fanfaroma’s Flash Mob Sonoro urged people to ‘open the windows, step out onto the balcony and play together’. The next day, another flash mob event,  Mestolata Collettiva, ‘Ladle Collective’, embraced that most primitive method of music-making, bashing pots and pans.

Many opted to sing the national anthem, Il Canto degli Italiani, which unlike ours is a wonderful song to sing and to listen to. But across the country everything from the Macarena to Imagine and Ti Amo to Ode to Joy has rung out across rooftops. The New European recently did a wonderful piece on how Italians have often used music in crisis, showing that, as ABBA said in Waterloo … The history book on the shelf, Is always repeating itself.

We Brits are perhaps not as out there as the Italians, but music is definitely playing its part in our response to this crisis. It is now a full four weeks since I decided, after Sport Relief, to limit my horizons to my house, and Hampstead Heath. Music, playing and listening, has become a big part of my survival kit. I am working my way through every Motown song as I pound out the miles on the Wattbike. Elvis, Brel, Piaf and ABBA are getting their usual outings. My bagpipes are being played daily, and for the first time in ages I am learning, and also writing, new tunes.

One of them, Our Neighbours, Our Nurses, I will play again this evening when I serenade our next door neighbour, Sissy Bridge, who is a nurse at the Whittington, as part of the now weekly Clap for Carers. A film of me marching her home from work a couple of weeks ago, taken on my daughter Grace’s phone after she urged me to go to the bottom of the road to greet Sissy, got millions of views and media calls and coverage from around the world, including earlier today from Bulgarian TV. There seems to be a yearning for music and kindness to neighbours. I will also play Highland Cathedral tonight, because I have been getting requests from people in the neighbourhood, and that is one of them.

And to Mr Jonathan Wheeler of Birstall, Leicestershire, who wrote to The Guardian asking if I was playing the pipes ‘to make music or to enforce social distancing, I say three things through the smile you inspired: 1. Bugger off. 2. Those who don’t like bagpipes have never heard them played well, or never listened. 3. My neighbours complains when I don’t play, not when I do! And if you want a full blast of half hour’s worth of me playing, go to Joe.co.uk , where they have just posted me doing one of their lockdown concerts!

I will also be playing a new tune, Everyday Heroes, which has been written by Martin Gillespie of the Scottish band, Skerryvore, to raise funds for NHS staff. He has gathered nineteen of the best professional musicians in Scotland – and me! – to record in our own homes, reading from his score, then send our individual recordings back to be mixed by his Skerryvore colleague Scott Wood.

The result is a wonderful sound mixing accordion, guitar, violin, bagpipes and drums, and a nice little film too. It will be released at 815 this evening, across Skerryvore’s social media channels, and the video will be available on YouTube where there will be donate option with all proceeds going towards the NHS Charities COVID-19 Urgent Appeal. The track will be available to buy, stream and download on all major platforms from midnight, with all proceeds from any digital downloads also going to the charity fund.

All of the members of Skerryvore took part, along with Innes Scott of Peat and Diesel, BBC Take the Floor Presenter and member of Mànran, Gary Innes, Robert Robertson of Tide Lines, Harry Richards of the Red Hot Chilli Pipers, Skipinnish’s Angus MacPhail and Rory Grindly, Ian Smith and Seonaidh Macintyre from fellow Tiree band Trail West, Mhairi Wood of Skara. Oh, and me!

Martin Gillespie said: ‘The response and support from other musicians has been fantastic. Everyone worked so hard to turn the track around in days. Hopefully when we are through this crisis, we can perform the track for NHS staff in person, but for now we hope they enjoy this tune written in their honour.’

And I said: ‘To anyone who knows anything about traditional Scottish music, me playing with Skerryvore, Skipinnish, Mànran, Peat and Diesel, Tide Lines, Trail West, Skara and the Red Hot Chilli Pipers is the musical equivalent of playing football with Maradona, Zola, Schmeichel, Ginola, Mattheus, Desailly, Dunga and Figo … which I did, in Soccer Aid, though I never talk about, apart from every day.’

Football and music. My life without them is unimaginable. At least, though we may be without football right now, we always have music.

May I remind you of the line which follows the opening line of ‘Estoy Soñando, as the Spaniards and South Americans call one of ABBA’s most famous songs …

I have a dream, a song to sing
To help me cope with anything…

ABBA. A band for every moment. Music, a joy for all time.

They got their kit off – so you get your cash out