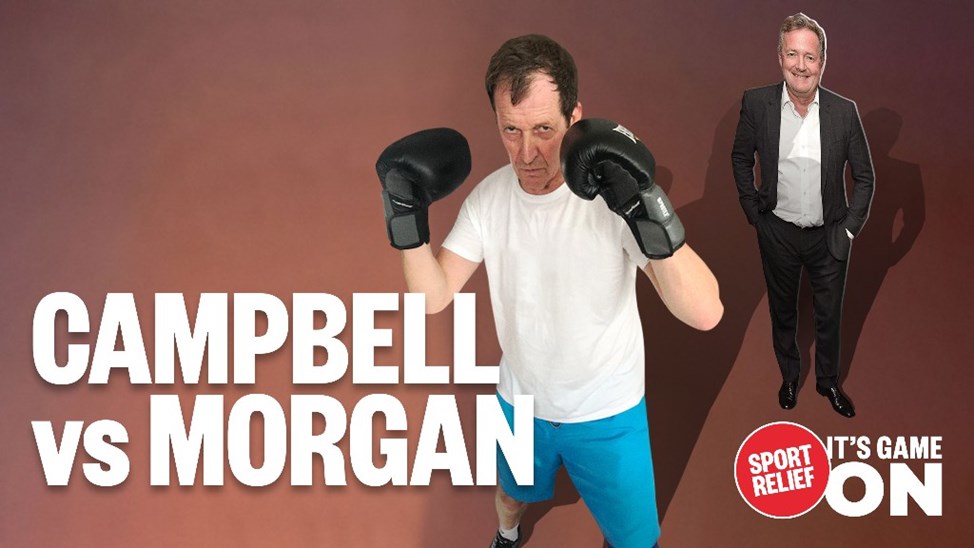 Sport Relief time on Friday, and I’m sure any of you who watch Good Morning Britain on ITV will be looking forward to seeing me and Piers Morgan slug it out in what Tyson Fury’s promoter Frank Warren has called ‘the celebrity fight of the century.’

You’ll have seen the two of us agree to this bout live on Morgan’s show on December 2, after The Sun asked me if I was up for a fight with him, and when I said yes, so did he, with Sport Relief reckoning that the prospect of two of Britain’s most loved (ahem) characters knocking lumps off each other, properly hyped, would be a huge earner for good causes.

Warren agreed to promote the fight, and to get us both top coaches and boxers to train with. Former Commons Speaker John Bercow agreed to be MC. Burnley manager Sean Dyche agreed to be my corner man. Piers got immediately into the act by getting up from the GMB seat and throwing a couple of jabs. ‘I’ll take you down any time mate,’ he said. ‘I’m genuinely worried about killing you, which would be a hugely popular thing for the nation.’

The headlines the next day could not have been clearer

In another Sun story, he ‘vowed to destroy’ me.

When he was in the studio without me to answer back, the Piers’ cockiness was even cockier. He said there was ‘panic’ in my eyes. ‘He knew it’d be weak if he said no,’ he said, ‘but he knew I’d also destroy him.’ He was getting into the hype … ‘set it up at Wembley stadium, me v Campbell, a fight to the death, and raise money for needy causes. We guarantee, everyone who buys a ticket, one of us will die in the ring!’

The Sport Relief team texted me to say Piers seemed hesitant. Then he started to text me too, saying he was worried it would be embarrassing, that we would look like a couple of silly old men. This was not something that concerned me, and frankly as he embarrasses himself most days on national TV, I could not see the problem from his perspective either.

So I pressed on … come on Piers, it will be fun, it will be different, it will add to the gaiety of the nation in these awful times. But now he was full on wobbling, claiming that we wouldn’t be allowed to hit each other in the head – news to me – and would have to wear lots of padding – also news to me – and then eventually, full a text signalling complete capitulation, victory for Operation Wimp …

‘I’m not doing this fight. Given it a lot of thought and there’s no upside for us. We’d just look ridiculous. As my sons put it: “Dad, not only is it stupidly dangerous for two blokes of your advanced age to do this, it’s also monumentally embarrassing.” So I’m out, sorry mate. On a positive note, you get to live …’

I replied: ‘As my sons put it: “You’d both train hard for it, be great telly, and make millions.’

‘We’d look absurd,’ he shot back, ‘a pair of old twats slapping each other in the stomach.’

My wimp charges were met with a barrage … ‘you’re 62. I would literally kill you … we’d both just look ridiculous which is on brand for you but not for a global TV star like me … ‘

‘You’re doing a very good Trump/Johnson job of hiding reality with bluster … disappointed in you.’

I was genuinely disappointed. I was in need of a new sporting challenge, and would have really got into this one. I also thought surely someone who has faced Aussie fast bowler Brett Lee in the nets has nothing to fear from a left jab from me. Alas, alas, alas …

Sport Relief were determined not to give up – they have projects that need funding – so they kept coming up with ideas and last week they asked us to do this instead.

–       2. Run on a treadmill set to the pace of sub-two hour marathon runner Eliud Kipchoge and see how many milliseconds we last before being thrown off.

–       3. Try to complete 5k in the time it takes the BBC Philharmonic Orchestra to play Beethoven’s Fifth in the Piazza outside the BBC studios in Salford (estimated 26 minutes).

This is clearly so not as good as a boxing match. But it’s a challenge, I had been keeping March 13 free in my diary in case Operation Wimp turned around, and so I said I was up for it if he was.

And guess what … back came the message that his brother, who is in the Army, was home on leave and they wanted to spend time together. So now I am thinking, I guess he just cannot face the thought of losing … again … as he did the last time we did a Comic Relief challenge, The Apprentice, and he got fired … again. Look it up on YouTube.

But still Sport Relief kept trying, and so, unless he can summon up the courage between now and Friday, we are going ahead with it. I am now off down to the cardboard cut-out shop to see if they can do me a life-size Piers Morgan.

Frank Warren was talking millions in terms of what we could have earned from a proper bout in the ring, and all of the above is not going to get anywhere near that. But this challenge is happening with or without Piers Morgan – at this stage it is ‘Man v Cardboard Cut-out’.

Or if you want to back me, the one who said he would turn up and keeps his promises, giving my all to raise money for people living the toughest lives – sponsor me here …

I have a sneaky feeling I may have a slight advantage in the physical challenges, but Piers can start to rebuild his reputation (sic) by giving a big whack himself – of dosh that is, not the whack he is so desperate to avoid in the ring, on the track, the pitch or in any other sporting arena.

And even if boxing is no longer part of the challenge, that cardboard cut out is going to get a major whack in the face! The country demands it.

At home and abroad, Cameron sets up policies which cannibalise each other

Bring back standing at football

Rebutting the good and the bad, and support from football fans

Labour needs to fight on record to stop Tory vandalism