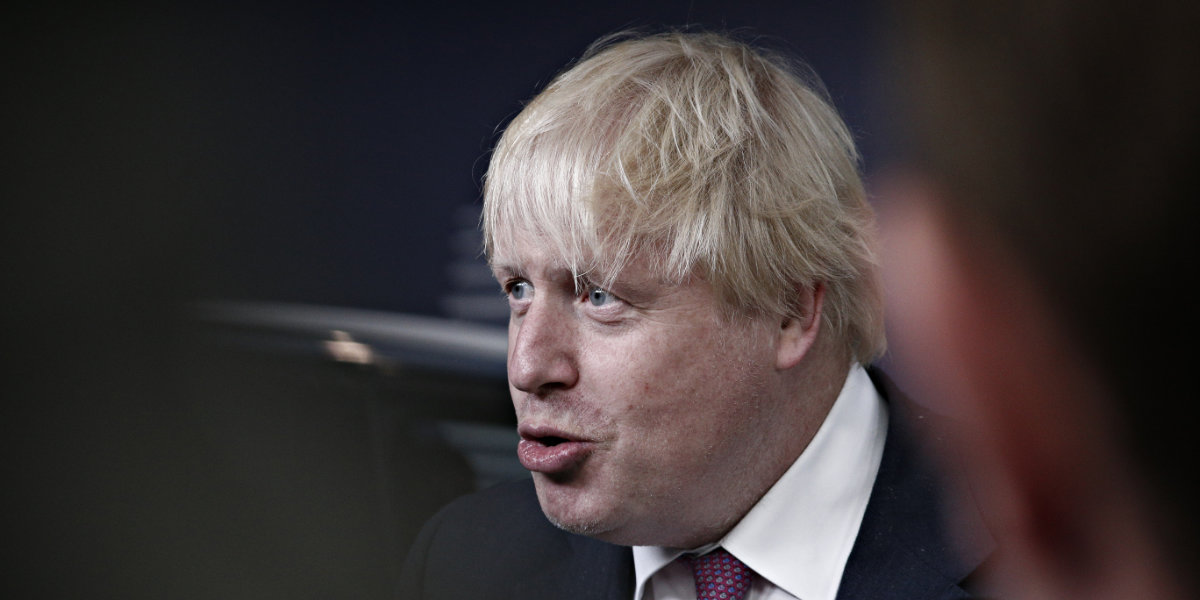 Twenty years ago, I was working for a government that was busy introducing a minimum wage, developing Sure Start, creating jobs for young people through the New Deal, legislating for a Scottish Parliament, fighting to reverse ethnic cleansing in Kosovo, and presiding over the Good Friday Agreement that helped deliver a peace once described as impossible to Northern Ireland. Boris Johnson was a journalist.

In his Daily Telegraph Brussels correspondent days, Johnson would sometimes turn up at my briefings at EU Summits, usually stand at the back, occasionally heckle, rarely take notes -why would he need official government sources when he decided his story for the next day the moment he woke up? This was the bent banana period of his career, when his paper would happily swallow any fiction he served up to feed the euroscepticism of the right.

The generally more earnest European media found him moderately amusing, a touch of colourful British eccentricity amid the often dull hard grind of European diplomacy. As the Prime Minister’s spokesman, I found him moderately irritating, but there were greater irritants to worry about. Certainly. on the days I might share a platform with Foreign Secretary Robin Cook, few in the briefing room would ever have imagined that one day that post would fall to the bumbling, grumbling, chuntering, scruffy blonde mess at the back.

Twenty years on … Robin Cook dead. Me writing about Johnson rather than the other way round. Sure Start being undone. The public services we built up being built down.

The Balkans once more unstable, not least because of US-UK indifference. The Good Friday Agreement under threat thanks to Brexit. And Boris Johnson is still a journalist. Yes, he is also Foreign Secretary, but one who is more journalist than statesman.

It is precisely because journalists still see him as one of their own that he gets the chummy ‘Boris’ headlines, the kid gloves treatment from the likes of John Humphrys, with his BBC flagship Today programme broadcasting a long item on how the UK is losing the PR battle with Russia, which kindly omitted to mention Johnson’s overstatement of the case, then the Sunday Times giving him a free hit against Jeremy Corbyn as Russia’s ‘useful idiot’, a role his own loose lips had played.

Think of any of the Foreign Secretaries who followed Robin Cook -Jack Straw, Margaret Beckett, David Miliband, William Hague, Philip Hammond – some better than others, but for all of them, we could place a tick against these qualities: serious, conscientious, diplomatic, read their briefs, understood the importance of relationships with counterparts, understood the importance of words, focused more or less on the big global challenges.

Johnson falls down on all of those and more.

I recently watched The Final Year, a documentary focused very much on foreign policy as Barack Obama’s presidency came to an end. Former Secretary of State John Kerry figures large, and boy. does he do serious, conscientious, diplomatic.

There is a fleeting sight of Johnson at the United Nations Security Council. But within the context of the film, and of the issues then under discussion, he was an irrelevance. I felt faintly ashamed to be British seeing him there representing us alongside serious people from other countries traipsing the world day and night trying to solve some of its greatest problems.

Part of the art of diplomacy is to be inside the minds of other leaders and other governments as they consider their own policies and actions. Does anyone seriously imagine foreign governments sit around asking ‘what will Boris Johnson say?’

So when the Assad-Putin chemical weapons fall yet again on the innocent of Syria, Johnson can trot out the words, as he did at the weekend, ‘we condemn, deeply disturbing, appalling, truly horrific, must urgently be investigated, Russia must not obstruct, we are in close touch with allies, blah blah blah’ much the same as after the last chemical weapons attacks.

It gets him through the news cycle. The UK media dutifully report. The world ignores, for the world knows that for Johnson, this is not an issue that keeps him awake at night, or has him working to try to find answers. As with Brexit, he does not do detail. He does words. He does headlines.

The UK, already less influential on foreign policy because of Brexit, further loses influence because of the Foreign Secretary we have.

A few months ago, I received a Whatsapp message from a senior minister in a foreign government who had met Johnson for the first time. ‘How is this clown your foreign minister? Anything anyone says, he makes a joke of it. Is it all he can do?’ He also said that depending on who he talked to, Johnson was happy to admit Brexit was not going to plan, but somehow we Brits would muddle through. Brexit too, to Johnson, is just one more jape, one more bounteous playground of stories to feed to the Telegraph and other right-wing publications, one more battleground for his own ambition and his Churchill delusion.

It is Johnson the journalist being more to the fore than Johnson the diplomat or politician that is responsible for the latest mess he gave Theresa May, over his handling of the Salisbury poisoning_ It remains the case that Russia, with the Kremlin’s knowledge and backing, is the likeliest source of the attack on former agent Sergei Skripal and his daughter.

The statement from the head of the military laboratory at Porton Down, that he could not say exactly where the nerve agent came from, or how it reached the UK, did not actually negate that. But it negated the over zealous words with which Johnson had immediately leapt on the issue, and thus handed Russia a propaganda victory it neither expected nor deserved.

“I asked the guy myself, I said ‘are you sure?’ and he said there is no doubt.” Yeah, course you did … Cue laughter in the Kremlin – has anyone explained to Johnson how this Putinesque hybrid warfare actually works yet? – and the embarrassed deleting of FCO tweets by officials who long for the day when Theresa May summons up the courage to reverse an appointment she should never have made.

I’m sure for all those former Foreign Secretaries we could find examples of misplaced words, unintended upsets, issues handled less well than they or we would have hoped_ But Johnson, led always by the desire for a headline more than the demands of diplomacy, takes gaffery to a league none of them ever got near_ He has committed more sacking offences than the rest of them combined. When Britain needs a statesman, it is stuck with a schoolboy.

Can anyone imagine William Hague thinking it would be a good idea to entertain Myanmar leaders with a Kipling colonialist poem? Or Philip Hammond, let alone the Labour ministers, putting President Hollande and ‘Nazi punishment beatings’ in the same sentence?

Would any of them have been incapable of using words about UK attendance at the World Cup in Russia without mixing up England’s footballers with members of the Royal Family? And while one can imagine plenty of right­wing columnists and shock jocks thinking that the middle of death and mayhem in Sirte, Libya, is the time to imagine it becoming the new Dubai, only Johnson could imagine it was suitable talk for a Foreign Secretary.

Nazanin Zaghari-Ratcliffe continues to languish in a foreign jail, Johnson’s sloppy, ignorant words at a select committee having boosted rather than challenged the Iranian case against her. For as long as the media took an interest in her case, so did he. Once the media lost interest, so did he. Story over. Phew. Got away with it. Onto the next one. Let her rot. Shocking.

Then of course there is the lying past, present and doubtless future that have featured so often in his life. The lies in the referendum campaign, whether about millions of Turks coming our way, or the £350m for the NHS, about which he continues to lie, were all part of a pattern. Back in the days before journalists inventing quotes became all too commonplace, The Times rightly sacked him for doing just that. Once Johnson became an MP, former Tory leader Michael Howard had to sack him from the front bench for lying when confronted about indiscretions in his private life.

When he was inventing stories in Brussels, or flying around on zipwires as London Mayor taking credit for the work of others in delivering the 2012 Olympics, it was possible to make the case that Johnson added somewhat to the gaiety of the nation. Not any more.

Say what you like about Theresa May, and I often do, not least because of her handling of Brexit, but she is more serious than frivolous, and does have a sense of duty that goes beyond merely serving ego and ambition. But even if we can understand why she felt the need to bring the Brextremists into her tent when she became Prime Minister, surely she can see now that every day Johnson remains in post, every sackable offence he survives, he weakens her and he demeans the nation, reducing us in the eyes of serious people around the world.

The joke needs to go, back to the career he never truly left.

So that’s what they mean by online community?