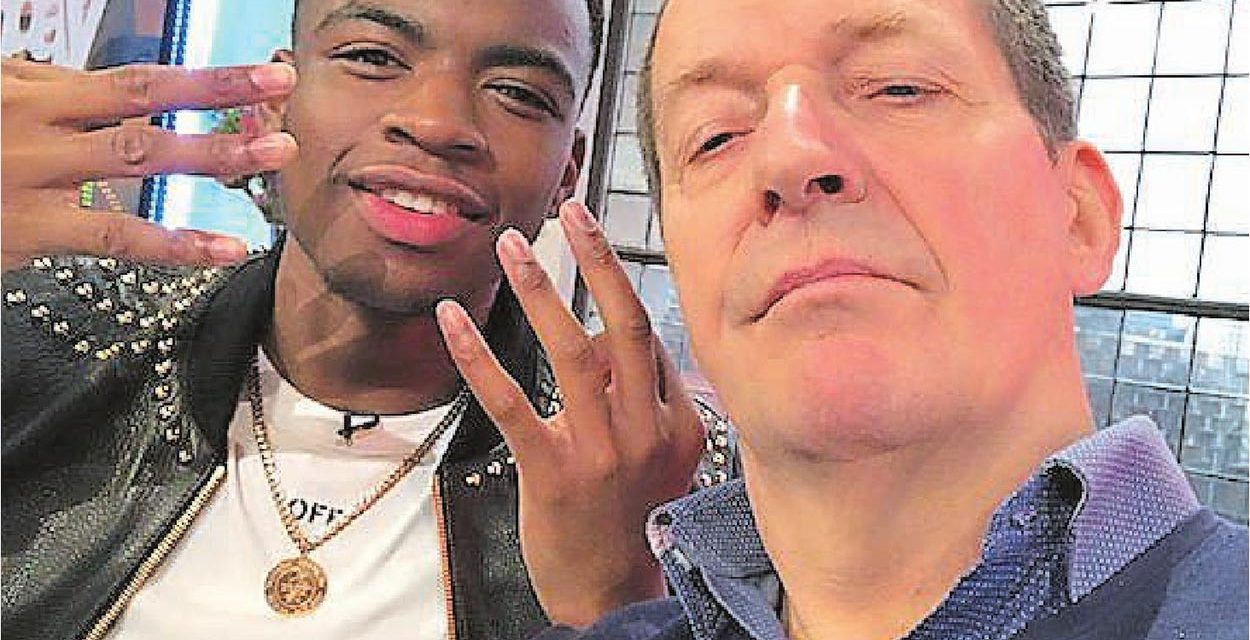 You find yourself in some strange places when you have a book out. And so, on Sunday morning when I would normally be out on the bike, or re-watching Match of the Day to see Burnley ‘s equaliser against Manchester City (again), while waiting for Andrew Marr to come on and be gentle with Brextremists, I found myself in a kitchen-cum-TV studio with a collection of guests not normally on my radar.

There was someone from Made In Chelsea who I discovered when I heard his name and checked him on my phone, had almost twice as many Twitter followers as I do. There was a comedian called Joel, a chef or two, and Rachel Parris of The Mash Report, who was making waves with a sketch about Piers Morgan ‘s lips getting too close to Donald Trump ‘s rear end.

The show was Sunday Brunch, and presenter Tim Lovejoy had warned me it was not like anything else I would be doing on this mini book tour. Actor Angela Griffin, who I had at least met before, advised me “just go with the flow” as the cookery mayhem began.
But any apprehension I had at being out of my comfort zone evaporated as I met the last two members of this eclectic mix, Mabel McVey. And Not3s. No, I haven ‘ t put a 3 where an E should be. He is Not3s, a 19-year-old rapper from Hackney. You pronounce it Notes, OK, but write it Not3s. OK? As for Mabel, she is 21 and, like him, a singer and they were there to perform a double act at the end, called My Lover. Look it up.

So how’s about that? Four whole paragraphs and I haven’t even mentioned Brexit. Who says I’m obsessed? Well, a few viewers actually; because when it came to my solo slot at the kitchen table to talk about the book, I could hardly not talk about Brexit when Tim asked me what I am up to these days, could I? Cue hilarious Daily Express story that I went off on a ‘rant’ and Lovejoy had to put it to a halt. It didn’t feel like that but, hey. Life goes on.

During the bits where the cooking is centre stage, the other guests sit at a table and watch and chat amongst ourselves. That is when Not3s and I began to get so friendly the word ‘bromance’ was, for a while, all over social media. He admitted he had never heard of me, just as I had never heard of him. But sometimes it is possible – and a great feeling- to hit it off across generations, professions and cultures. Go to the blog on my (redesigned, don’t you know) website posted later that day about the power of youth, scroll down and see the ‘bromance’ was made. The gig is on. And if there are any anti-Brexit musicians out there, spread the word. And get in touch.

Ah there he goes again, the Brextremists will wail, metropolitan
elite, thinks he can stop this Brexit dream by getting down with the kids and playing a bit of music. Well no, it goes a lot deeper than that, and in the end, it will have to be parliament where this all gets decided.

But the one thing I have learned from watching the other side is that campaigns need ideas and energy from wherever they can come.

Yes, you need overall strategy and good leadership, and we have been a bit lacking on both of those. But you also need a team, and you need to harness talent from whomsoever, and wheresoever you can find it.

One of the most frustrating things these past months has constantly been being asked by people ‘how can I help stop this madness?’ and we don’t have an easy answer.

On the anti-Brexit front there are competing strategies , competing campaigns, different lines of argument about how to reach a similar goal: namely giving the people a say on the final deal, whether in parliament or a fresh referendum on a second question, so that now we know more what Brexit is going to look like in practise – costly; chaotic , weakening for the country as a whole but strengthening for the hard right – they can decide if they would like to change their mind.

These differences came to a head recently when Mark Malloch-Brown, former diplomat turned businessman and frontman of the well-funded Best for Britain campaign, announced they did not wish to be part of the umbrella grouping brought together under Labour MP Chuka Umunna’s chairmanship, which has been bringing a bit more rigour and political strategy to events.

I have attended some of these meetings and there are people in the room with whom I do not agree on everything. I too would wish our MPs would become more aggressive, more ‘out there’ against their own leaderships matching us together towards a cliff, with the only difference seeming to be that Labour would take a bit more care trying to open the parachute before it fails.
But where we are in total agreement is in the belief that when you worry your government and your country are making a terrible mistake, you have to say so.

You have to raise your voice in whatever way you can. That is why I left the Sunday Brunch studio not only pleased I had been able to plug the book, meet the woman who got right up Piers Morgan’s nose and eat some amazing rhubarb ice cream kind of thing; but most of all I had been invigorated by the power and the possibility of youth and creative talent.
Not3s and Mabel are not going to stop

compilation put out by the show.
By now, though, Mabel, stuck out at the end of the table, was feeling a bit left out, so after the break, she re-organised the seating plan, so she was sitting between us. Not3s has been doing a bit of research and discovered not only did I used to be somebody before he was born but also that I played the bagpipes. The other B-word in my life.

Within a minute, we are onto the real B word. Brexit. And I learned that like most young people they are totally opposed to it, don’t want it to happen but don’t really know what to do to help stop it.
And so, ladies and gentlemen, a new musician collaboration was born. Rap, blues and bagpipes against Brexit. And what I saw in these two – whether
re-arranging chairs or coming up with new songs – when the idea hits, they make it happen.

But it doesn’t matter. The connection Brexit. Only parliament and the people can do that. But they can help. Like we all can. And in thinking they could do something, their mindset is just to do it.

GB, temper or not, a better leader for Britain than DC