Thank you Boris Johnson, for reminding me of our right and our patriotic duty to resist you and your Brexit 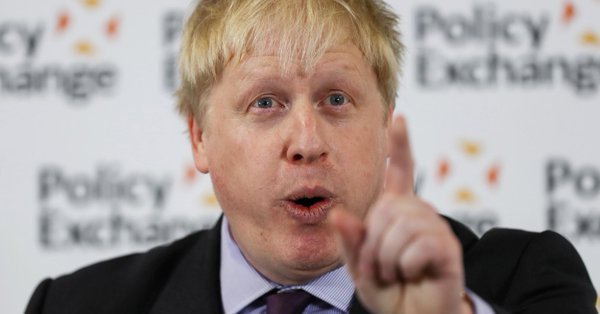 And so, twenty months after getting their marching orders from the British people, the government has embarked on ‘the road to Brexit.’

If you ask Mr Google the question ‘how long does it take to build a road?’ you get a variety of answers, from a couple of years for cheap and cheerful (and short) to a decade for much bigger projects, but ‘a mile a week’ seems to be about par for the course. So by that calculation the government road to Brexit should be around eighty miles long right now. Instead of which, they appear barely to have got beyond the end of Downing Street without multiple car crashes, and what road they have thus far built is somewhat littered with large potholes – the fallen pound, the vanishing European agencies, the massive exit bill, the NHS crisis and other Brexit-related disasters that politicians and media like to pretend have nothing to do with Brexit at all.

It is hard to think of anyone less well placed to get the road back on the road than Boris Johnson, Liar-in-Chief of the Leave campaign, fundamentally disloyal to Theresa May and to her predecessor whose Premiership he destroyed, a man driven all his life by an enormous belief in Boris Johnson and not much else. Did he, I wonder, have two speeches ready for today, as he had before knifing David Cameron? For a reminder of his sole motivation in life – himself – do take a look at this.

Let us deal with this notion that his speech is part of some carefully choreographed Number 10 operation. Johnson was always going to be making a speech just now, as he was worried the Cabinet was getting cold feet at the idea of hard Brexit. Theresa May, in allowing him to get away with misdemeanours other ministers wouldn’t, so signalling her weakness and his unsackability (for now), did not want another wave of headlines saying he was laying down the law to her once more. And so they cooked up this idea of a ‘series’ of speeches setting out ‘the road.’

The BBC has been loyally parroting the Johnson spin all day, that this is a Valentine’s Day wooing of Remainers – I even had to do a Five Live interview with romantic music playing in the background – but on the substance, this is still very much the hard Brexit the Tory right are demanding.

Yet for all his words, and all the words said about them, a fundamental problem remains – the Cabinet is divided in several parts. Until they can breach those divisions, how can the public be expected to? Until they can reach agreement on the substantial points of negotiation with the EU, who remain pretty solid on all this, why should we expect the negotiations to go well from the UK perspective? And if they don’t know what the preferred endpoint of all this is, how can they expect the public to support them on it?

In some of the interviews I have done today, it has been put to me that public opinion is not shifting, that the pro and anti Brexit numbers are roughly the same as they have been for some time. But just reflect on this for a moment – the government, the Labour Opposition, most of the press, and sadly above all the BBC, portray Brexit as a done deal, and the notion that it might be undone as some kind of dreadful heresy.

Yet despite this enormous weight of opinion, the government is failing to unite the country, and millions of people remain steadfastly opposed to the idea that a Brexit won on lies, whose destination is so uncertain, can be allowed simply to happen because right-wing charlatans like Johnson, Farage and Rees-Mogg say so. Likewise many Labour members are growing ever more angry that Jeremy Corbyn is doing so little to stand up against this hard right hard Brexit that will, as we saw in the Brexit impact assessment papers last week, do so much damage to working class areas of the UK. The mood is turning, and as so often the public are ahead of the politicians and the media.

What Johnson’s speech did for me was to remind me just how much of a charlatan he is, and to reinforce my view that he is not someone to be in any way trusted to shape the kind of country my children and their children should live in. It also confirmed me in the view that this is a fight that can be won, provided we defeat the fatalism most of our media is seeking to engender.

On which subject, I was pleased that a combination of public and private cajoling finally led the BBC to follow Sky News in taking Femi Oluwole, one of the four founders of the excellent Our Future Our Choice campaign aimed at getting students to resist Brexit. Watch Femi’s interview with Adam Boulton here.

He is not alone. We are not alone. There are millions of people who feel Brexit is the wrong course for Britain, and want to stop it. That is our democratic right and, if you feel it will damage your country, which it will, our patriotic duty.