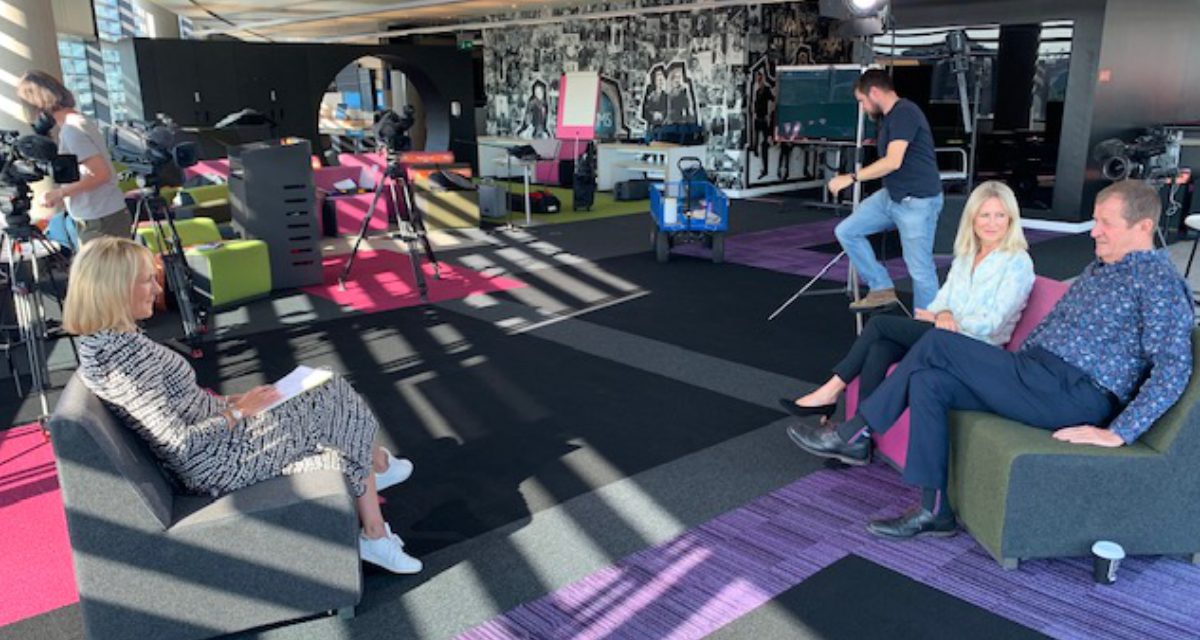 I’m writing this on a train south from Manchester, having taken a train north with Fiona last night, to pre-record an interview this morning for tomorrow morning’s BBC Breakfast show. Yes, Covid-19 keeps forcing us to ring the changes.

There was a neat symmetry that this should be my first major outing post-holiday, as it was back in mid-March, after the same train journey north for Sport Relief, that I decided to take myself into lockdown, while Boris Johnson and Co continued to pretend that somehow British exceptionalism would see off the virus without having to do the things other countries were doing.

But the train journey, on a very under-occupied train, felt different. Manchester, whose city centre was so quiet this morning, felt very different. And the BBC HQ felt like a ghost town.

Pre-recording the interview with Louise Minchin felt very different too, but was a consequence of the fact that Breakfast are limiting numbers in the studio. Anyway, all being well, it will be on tomorrow morning, when I will also be talking to the Today Programme, and to Loraine on ITV.

Did I mention I had a book out? LIVING BETTER: How I learned to survive depression. It was due to be published mid-May, but Covid put paid to that. Lots of other writers and publishers had the same idea … ‘let’s wait till the autumn when things will hopefully be clearer’ … which is why you will find no fewer than SIX HUNDRED hardbacks are being published this week.

The reason Fiona was with me on the pre-record sofa is that she has written a chapter in the book, entitled ‘How to live with depression when it’s not your own?’ which was, pre-Covid, the final word. However, I have now written a postscript, on some of the mental health implications of the coronavirus, the Royal College of Psychiatry having warned it could create a ‘second pandemic.’

I had not been keen on a delay but my editor, Georgina Laycock, said she felt more and more people might perhaps, as a direct result of the crisis, experience the kind of depression and anxiety I already knew all too well, and that coronavirus and its impact would therefore make it more not less relevant.

That may very well be right and sadly, the worst may yet be to come. I record in the postscript a report by Professor Ian Hickie of the University of Sydney’s Brain and Mind Centre, warning that suicide rates could rise by up to 50 per cent in the wake of the catastrophic and prolonged economic impacts of COVID-19. The report argued that the ‘best case scenario’ was a 25 per cent increase in suicides in Australia, with the likelihood that about 40 per cent of those will be among young people. Professor Hickie said the modelling indicated if the economy deteriorated further, that figure would escalate to a 50 per cent increase in the number of lives lost to suicide, with rural and regional areas hardest hit.

So that is Australia, which at the time had had fewer than 7,000 cases and just 97 deaths. What the eventual impact in the UK might be, with deaths in the tens of thousands, and the Bank of England forecasting the economy to shrink by 14percent whilst unemployment doubles, is anyone’s guess, but it is not a happy situation.

Not for nothing is the word for sustained economic slump … depression. It certainly seems inevitable that once we emerge from this crisis, we will do so accompanied by a veritable tsunami of psychological and psychiatric distress.

Parking economics for the moment, just think of the mental health consequences for NHS staff who have been dealing with this; for all the low-paid key workers who have kept our infrastructure going; for families unable to say farewell, console or bury loved ones; for parents who have been trying to teach, work full-time and pretend everything is all right; for children removed from their friends and trapped in their homes, the school year wiped out along with the exams they have studied for; for the workers seeing their livelihoods vanish; for couples forced to confront unfixable cracks in their relationships; for older people learning that they have to be afraid of everyone. Everyone has tasted a sense of anxiety and even paranoia. And often, with no physical contact to comfort them. No hugs or even hand-shakes. Social distancing may be necessary. But that doesn’t make it good for anyone

So yes, obviously I hope the book does well, as I have put a lot of myself into it. But I also hope it helps fellow depressives to see in some of the ideas, strategies and exercises that have helped me, something that can help them. And I hope Fiona’s perspective in particular helps those who are living with depressives to manage both their own and their loved ones’ moods and emotions better.

Talking to Louise, Fiona recalled phoning my then boss when I was in my late-20s, saying she worried I was having a nervous breakdown, and being brushed off and made to feel small. A short time later, I was arrested and hospitalised. She said she wished she had known then what she knows now about mental health, and mental illness. And I hope that someone in their 20s or 30s might learn from my mistakes, having taken far too long to face up to the reality of depression, and the need, sometimes, to get help.

The key to it is talking, being open, with ourselves and with each other. And for many, it remains as hard as ever. But while we rightly look to government to provide the services we need, and to employers to take seriously the mental well-being of their staff, there is also an awful lot we can do for ourselves, and for each other. The overlong journey I took to get to that point is at heart what the book is about.

Here, from the Observer, is an extract, and here is a piece I wrote for GQ about what depression feels like.

All the best. Forgive me if I spend a lot of time this week talking about it, and promoting it, but with 600 books out there, it is going to be a fight to get heard!

Guest blog from a candidate in Tory-Lib council land

Michael Foot … above all else a lovely man