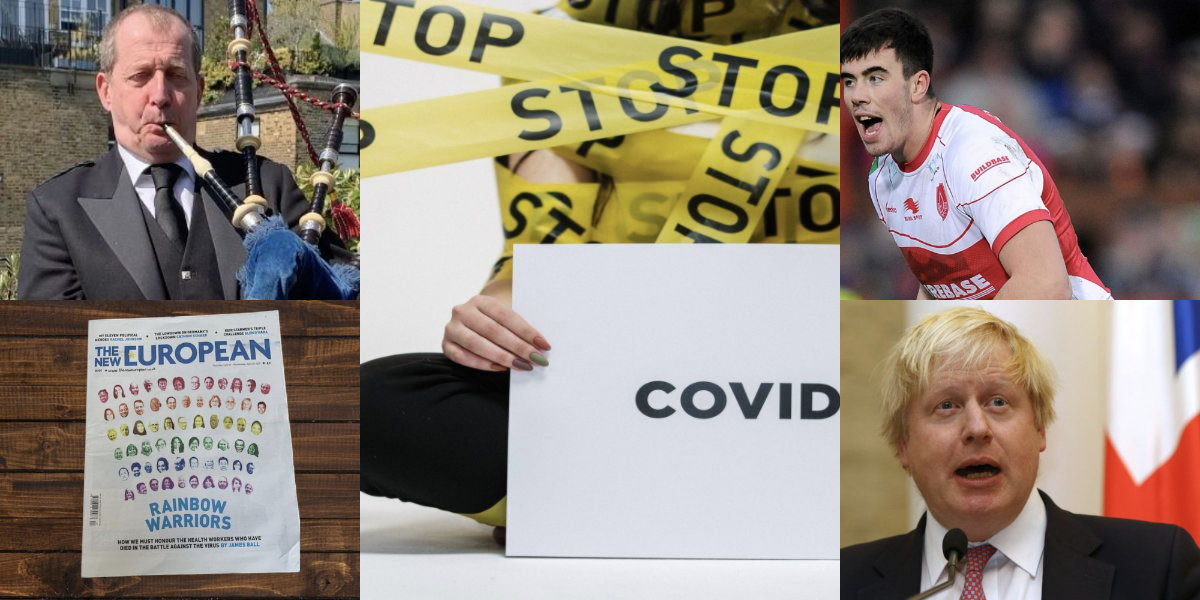 It is almost three weeks since I curated my various blogs and articles in one single place, not least to help me keep tabs on what I was saying in a somewhat manic, over-productive phase, but also for the benefit of anyone who was interested in what I had to say.

So everything from March 21 to April 13 went into this single blogpost.

Let’s kick off with coverage of the charity single, Everyday Heroes, the single which I had recorded as guest bagpiper with Skerryvore, getting to Number 1 in the iTunes download charts.

Then something I missed when posting Part 1 of Rants, Rambles and Ruminations, namely this interview for boxing promoter Frank Warren’s Heavyweight Podcast. Good questions.

April 18 – A long whimsy on how much I was missing football in a piece for The Independent, which some took more seriously than was intended, especially some of my illustrations of why social distancing and football were incompatible on and off the field.

April 19 – a piece for the Sunday Post on something really nice which arose from an earlier piece I had written in the Telegraph about The Queen – an old friend of my Mum’s sending me letters My Mum had written to her in the week I was born.

April 19 – On the same day, another blast from the past came in this blog by an old university friend of mine, Robin Coupland, about our time busking in Brussels.

April 20 – Back onto the political terrain then, with a piece for The Article on some of the truly dreadful performances being given by Cabinet ministers at the Number 10 briefings. Former Tory MP Nicholas Soames was clearly sharing the pain, taking to twitter with one of his long hashtags …

‘Today’s ministerial briefing very close to a near death experience,” …

April 21 – I don’t know if my growing rage at the briefings was a cause but by now my mood was taking a dip, and I returned to the mental health theme of one of my early lockdown postings, on tips for staving off depression and anxiety, to give myself 20 ideas for action based on my own advice, in this piece for The Independent.

April 22 – The next day, I got a message from my pal Edi Rama, Prime Minister of Albania, that it had appeared in one of the papers there. God knows what they made of my adaptations of Flower of Scotland, including one that was a tribute to my anti-depressant of choice, sertraline. And, with a little help from Google Translate, may I say: Faleminderit, dhe mbaroi mirë Shqipëria për të bërë një punë shumë më të mirë se Mbretëria e Bashkuar në trajtimin e pandemisë.

April 22 – In advance of an appearance as a panellist on the Jeremy Vine TV show, I wrote a piece for The Guardian about Labour’s approach to the coronavirus issue, saying Keir Starmer had made a good start, but that with the government making so many mistakes, and amid so many deaths, a more robust approach was needed.

April 22 – Labour was one of the issues my local paper, the Ham and High, wanted to cover, along with my new found tree obsession, and my bagpipe composition for our next door neighbour, Nurse Sissy Bridge.

April 23 – Back to one of my regular themes, how bad the government communications were, and with some ideas for improvement in a piece posted on my blog.

April 24 – New European column on the 20 things I most miss in the lockdown, from Burnley FC at Number 1, to ‘la bise’ at Number 20. Yes I miss kissing women on the cheek; and I really, really, really miss live football at Turf Moor.

April 25 – Having discovered from reactions to interviews, not least from Burnley manager Sean Dyche and some of the players, that viewers were more interested in clothes and backdrop than what I was saying I wrote this piece for GQ about what we were learning about MPs and pundits from their backdrops and bookshelves. Oh, and by the way, the Jeremy Vine show is this week doing an item on bookshelves. There I go, trend-setting again.

April 25 – LBC presenter Maajid Nawaz and I having done a long discussion on trust in media and politics for Unherd’s Lockdown TV, he and I later also discussed it on LBC.

April 25 – I had played my pipes for my first virtual funeral, and wrote a piece about the importance of music, and to me especially of my pipes, in a piece for The Daily Record, which I can’t find online. I wrote a longer piece on the same theme for the Press and Journal, This was mainly so I could pay proper tribute to George Mackie, friend, farmer and former Scotland rugby international, who sadly had died after a long illness; but also to record the fact Everyday Heroes was still top of the Scottish iTunes Charts.

April 25 – Meanwhile, continuing coverage of my piping in the weekly clap for carers meant I was now getting requests like this one, for The Heath on the old ICI site up in Runcorn.

April 25 – Good chat with George Parker of the FT on the media coverage of the crisis, for The Week in Westminster.

April 26 – For The Article, and for The Independent, I wrote about how I believed Boris Johnson could and should use the five living former Prime Ministers in the crisis. I felt better for writing it, even while knowing it would be ignored, as have been most of my recommendations for improving their briefings.

April 26 – Priti Patel got my comedic juices flowing, when she was allowed out at the Number 10 lectern for her second successive Saturday briefing, and boasted of how the government had presided over a fall in shoplifting. This prompted me to do a piece for The Mirror on other remarkable lockdown success stories, like the fact there had not been a single red or yellow card in football for several weeks.

April 26 – I was pleased to get a few points over in this interesting New York Times piece on the Number 10 briefings, even if the fabled NYT fact-checkers didn’t check how to spell my name.

April 26 – My daughter Grace and I decided to do a podcast despite not having our usual stellar guests. It was a very wide-ranging discussion, in which she outed me for listening to Taylor Swift’s Greatest Hits, told me lots of her friends were splitting up with boyfriends because of lockdown, took the piss out of my Tree Olympics and my birdsong recognition app – ‘Shazam for birds’, and revealed she wears a mask not for health reasons but to avoid people she doesn’t want to talk to. We both admitted we were worried our dog Skye will have separation anxiety when lockdown ends. We both loved Misbehaviour, the new film starring Keira Knightley and Jessie Buckley, about women’s liberation activists taking on the Miss World Pageant. We agreed that having my bagpipes insulted on twitter by John Cleese, whig then rowed back by saying he liked me, was one of the coolest things that had ever happened. I revealed I was sick of people saying ‘stay safe,’ verbally and in emails.

April 27 – Boris Johnson returned to work and gave a statement outside Number 10, and I suggested he should get to the House of Commons and face some proper questioning, in this piece for The Article.

April 28 – Grace, normally a drama queen and hypochondriac, had impressed me in lockdown, as I wrote for The Huffington Post.

April 29 – Boris Johnson’s baby leading to him skipping PMQs, I returned to my theme that he avoids scrutiny, and in suggesting he should have been in Parliament provoked some to class fury in the old Daily Express not just once, but twice. Dan Wootton of The Sun and Talk Radio was especially peeved, calling me hypocrite in chief, when in truth it was the opposite of hypocrisy that prevented me from being distracted from the real scandals in the government handling of Covid by joining in celebration of the latest chapter in the Johnson soap opera. Dan and I had a moderately friendly discussion about it all on Talk Radio.

April 30 – with the media excitement growing ahead of Boris Johnson’s first media briefing since being taken ill, I wrote a piece for the Huffington Post with twenty suggested questions. And then I wrote another one here, with some more. Yet again, the journalists let me down!

April 30 – an analysis for The New European of which leaders had done well, and which badly, on their strategic handling of the crisis.

April 30 – a nice surprise in several outlets, including here the Independent, that the BBC were repeating my documentary, Depression and Me, later this month (annoyingly, just at the time my book based in part on the film would have been published. Thanks to Coronavirus, it will be joining many postponed publications in September.)

May 1 – A rare, but sad, escape from the Covid-19 crisis, but a terrible time for the family of rugby league player Jordan Cox, whose death aged 27 prompted me to write this tribute. I was pleased to receive a lovely message from his Mum, Amanda, later the same day.

May 3 – The Sunday Times also ran my tribute to Jordan Cox.

May 3 – And today, partly prompted by all the whingeing and whining that Matt Hancock’s utterly dubious claims to have met his testing target were not been greeted with Hallelujahs and adulation, I wrote a piece for The Article on a once tough media pack would have covered his claims during the New Labour era.

He and Johnson do not know how lucky they are; one of the themes I have been addressing in a very long read I have been working on, and will put out soon, once I have decided the best way of publishing it.