OK, I’ve listened. I’ve listened to people like the wonderfully named James Ski, who stood up at a mental health event I was speaking at, and said ‘I’m a big fan, but your website’s shit.’

His considered advice was that it was old-fashioned and hard to use on mobile. He wasn’t the first to have said so, nor the first to have criticised me for being too intermittent in my blog postings, but he cut through. So I called my friend Warren Puckett, a North American Scottish Nationalist, so just the kind of quirky mind I needed, and asked him to get going with the revamp, which to be fair he had been urging on me too. Here it is. Hope you like it, James, and everyone else.

As to what you can expect content wise, I am not promising to blog every day, but am promising to do so more often than of late, and also to put up here not just my social media interactions but the longer pieces I do for others, like an article I wrote on Labour for the FT last weekend, or the weekly columns I have been writing for The New European (and please don’t use that as an excuse not to buy the whole paper, or even better become a subscriber – it is an important part of the anti-Brexit campaign.)

Yes, Brexit will continue to figure large in my outpourings. What a total disaster it is turning out to be, yet both Government and Opposition seem determined to plough on. We have to step up the campaign against the positions of both. Something has to give, and I am confident it will, provided we stay angry and determined, and get the various campaigns on this working together better.

Mental health will also continue to be one of my obsessions – my own mental health, and the issue more generally. We are winning the battle to improve attitudes, but losing the battle for the resources and the services we need. On the subject of my own mental health, and the different ways of treating and looking after depression, I am in the middle of making a film for the BBC about all that (which won’t stop me from criticising their coverage of Brexit – far too slanted towards the Brexiteers.)

I have taken heed of the complaints from some sad souls that the website colours were too close to Burnley, but my football passion will be an obsession till the day I die. Indeed the other thing to tell you about is my new book, out next week, which is a novel about football and IRA terrorism set in the 1970s. It is a story of a struggling Northern football team – so not Burnley – and an IRA active service unit waiting the order to take out a Cabinet minister. It is my fourteenth book, and the first I have co-written, with former Burnley striker Paul Fletcher, who you can meet in the film above. You can also see his greatest goal here  which he scored in an incredible 4-1 away win against Don Revie’s dirty Leeds. They say you should never meet your heroes. This one has become one of my closest friends.

It has been a lot of fun writing it, and we are both very proud of the collection of names singing its praises on the cover – Delia Smith, Tommy Docherty, Ron Harris, Johnny Giles, Tom Watt, Bertie Ahern, Brian Flynn. Hilariously, the publishers’ lawyers suggested we had to get permission from Harris and Giles for the way we portrayed them – hard bastards – but of course both were absolutely fine with it. As Harris says, it is a throwback to an era when ‘football was a man’s game.’

To give you a taster of the book, here is the Prologue and Chapter One.

Charles Kennedy Memorial Lecture – on friendship, mental health, addiction (and what he would have made of the Brexit fiasco) 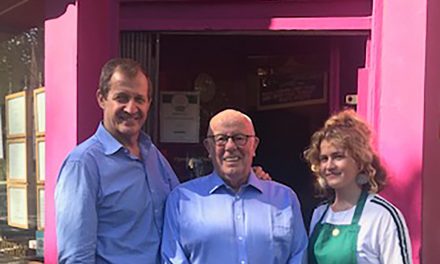