Beautiful but macabre setting for work on volume 2 of diaries

Greetings from Lake Megunticook. Those of you who read my second novel, Maya, may have heard of it. It is the place in Maine, New England, where the narrator, Steve, came to write the story of his friendship with Maya.

In a piece of detail, I (or Steve) described how youngsters leapt from a 60 foot high mossy ledge into the lake as a coming of age dare, and how the person renting the lakeside home to Steve advised him against trying it.

Proving the old adage that fact is stranger than fiction, the lake is currently buzzing with police and marine rescue boats and divers because yesterday four young men went leaping from the cliff, and only three came back. Our hosts say it is the first time they have heard of anyone actually losing their life trying the leap, though people are warned against it.

Just as fictional Steve finished his book here, so I am going through volume 2 of my diaries, Power and the People, which covers the heady first two years of the Blair government, a period which included everything from Princess Diana’s death to Monica Lewinsky, the Good Friday Agreement, the Omagh bombing, devolution, Britain’s presidency of the EU, Kosovo, the first attacks on Iraq, the first sex scandal (Robin Cook), Peter Mandelson’s first resignation, and much else besides.

As well as checking in a control freak kind of way that all the footnotes makes sense and the square brackets are in the right place, this relaxed lakeside reading is mainly aimed at thinking about the overall message and positioning for this volume, which will be published early in the new year.

It is the sort of process which led Peter for example, to position ‘The Third Man’ as being all about himself, and without much regard to the possible political fallout of anything he might say. I must say that, half way through this volume, it is striking that someone who now presents himself as having been so all important at the time spent so much time and energy complaining how little he was involved.

This volume also covers our first difficulties with so called sleaze, not least the furore over Bernie Ecclestone’s donation to the party. It is interesting to note the very different media approach to any funding stories concerning the Tories, even though they are now in power.

We certainly had a honeymoon period. But even during it, the media never stopped coming at us big style whenever they had the chance.

By the way, if David Davis is reading this, give me a call to fix lunch. It’s been a while.

And finally, thanks to Iain Dale who is reading Prelude to Power and has already sent me half a dozen emails pointing out editing errors … proving that even with several layers of control freakery, sometimes mis-spellings get through. 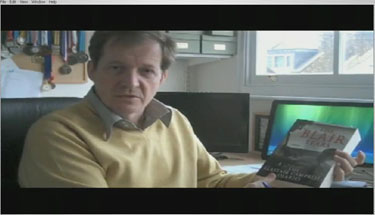