Today is the fourth anniversary of David Cameron’s election as Leader of the Conservative and Unionist Party.

I think we should all just have a moment’s reflection, and ask ourselves what we consider to be the most telling moment, thought, image or (honestly, come on, let’s try) ‘policy’ of those four years.

For me, I am still struck by some of his early environmental image work … the wind turbine on the Notting Hill roof, the cycling to work (albeit weakened by the gas-guzzler following on behind), the brief flirtation with ‘vote blue, get green’ and above all that great picture of him all bright-eyed and rosy-cheeked at the Arctic Circle on a sled pulled by huskies.

I am now however even more struck by the paucity of environmental policy and the thin-ness of environmental voice that he lends to the debate in advance of what could be one of the most important events of his political lifetime, namely the Copenhagen Summit on climate change.

The contrast between huskies back then, and near silence now, does lead one to the conclusion that there is something to the charge that he is more worried about pictures than he is about policy and substance.

I was talking to someone the other day who is on the fringes of the Tory strategic debate (he works for one of the pollsters the Tories use) who said that Cameron’s current strategy was to make a bit of noise every now and then but a lot of the time to keep his head down.

His health and safety speech would fit in the ‘make a bit of noise every now and then’ category. His lack of a big message pre-Copenhagen or pre-Pre Budget Report falls into the ‘head down’ side of the ledger.

It suggests he really does believe governments lose elections, rather than that oppositions win them. But while it is true that back in 1997 we were helped by the Tories, and might have won whatever we did, I doubt it, and I am sure the size of the majority was down as much to what we did as to anything the Tories did.

Indeed, when you look at the scale of change led by Tony Blair in his three years as Opposition Leader, and the extent to which we dominated the political debate as the Party went through a major process of change to policy, Constitution and pretty much everything else, Cameron’s four years of leadership seem pale and inactive by comparison.

The notion that as we enter an election year the Leader of the Opposition should opt to coast, and keep his head down, is bizarre. But it is to some extent confirmed by the approach to his team, something Andrew Rawnsley writes about in his Observer column today. Cameron is deemed by the Tory image-makers to be just about palatable to the public, WIlliam Hague and Ken Clarke are already well-known public figures from their previous incarnations, George Osborne is bound to have a profile as shadow chancellor. But apart from them, every single one of the shadow cabinet could walk down any street in the UK pretty much unerecognised and unmolested. It is pretty odd to think they could within a matter of months be running every department in Whitehall.

Enough from me though … what do you see as the thus far abiding image, comment, observation or policy?

Nick Clegg can have my painting of him for nine grand 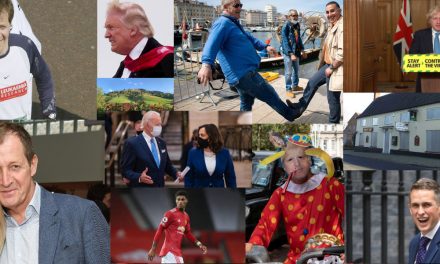