Cameron confuses strategy and tactics and puts Union at risk

Off to Scotland today and, in what those who ever ate with him call ‘Robert Maxwell catering’, I will be at two dinners, one an awards ceremony, the second a Labour fundraiser.

For Captain Bob, two dinners was in fact sometimes a conservative assessment of his eating capacity. I remember once attending a dinner he hosted for the Argentine ambassador, who was unaware that in a second room, Maxwell was having a second dinner with senior executives, and in a third, he was having a third dinner with an American businessman.

I remember too former Mirror editor Mike Molloy telling me of a Christmas dinner where turkey was on the menu. Mike and the other guests were offered a leg or a few slices of breast. Maxwell was given a whole turkey and demolished it before wiping his mouth and blowing his nose on his paper hat.

Tonight, I will probably have starter and main course at dinner 1, do my speech, then head to dinner 2 for course 3. I’m then supposed to get back to the bar of the hotel where dinner 1 is happening, presumably to give the impression I was there all the time. Spin!!

Anyway, enough of my eating and logistics, and on to the matter of David Cameron’s handling of Scotland and Scottish politics.

Insofar as he has support that goes beyond the superficial, it tends to be in parts of the South of England, and among the media metropolitan classes who are bored with Labour, and for whom it doesn’t really make much difference who is in power.

In Scotland, he has very little support, superficial or otherwise. But he is seeking to be Prime Minister of the UK, and that means he must at least look willing.

So he tells the Scots that he will show Scotland ‘respect’. One would hope so. It is after all part of the country he wishes to govern and which he wishes to maintain as a United Kingdom.

But in maintaining his line, reaffirmed at his conference, that Scottish MPs will not be able to vote on exclusively English matters, he is in fact unknowingly conspiring with the break-up of the UK.

And why? Because ‘English votes on English issues’ is one of those nice, easy, glib lines likely to play well enough with people who don’t think too deeply about the development of the Constitution. But the Westminster Parliament is the Parliament of and for the whole of the UK. It is, and always has been, a place full of anomalies and inexactitudes. But once you start saying that one kind of MP is inferior to another, which is what he is doing here, you undermine not just the Scottish MPs, but the Parliament as a whole.

Of course devolution has changed the political landscape and, for example, the reduction of Scottish representation at Westminster is in part a response to that. But Cameron’s line goes much further. It shows up – a trend here – his confusion of strategy and tactics. His strategic goal is to maintain the Union. His tactic will play right into the hands of Alex Salmond and the SNP in their drive to independence.

It won’t exactly help Scottish candidates either, going round doorsteps saying ‘vote for me, my leader thinks I’m irrelevant.’

Meanwhile our lazy, supine media fails really to get stuck into this as an issue, which means Labour has to get stuck into it with sufficient vigour for the media to have to take notice. Cameron goes on about ‘broken Britain’. Yet he could be the one to break up the UK.

I was thinking back to how the media used to cover Labour conferences in the run up to elections when we were in opposition, particularly in the Neil Kinnock era. Had there been the equivalent of an ‘English votes on English matters’ issue, let alone all these weird and not so wonderful extremists from Poland and Latvia wandering around the conference as part of a weird and not so wonderful European grouping, or if the bulk of the Labour leadership had come from a working class/union background in the same way that the current Tory leadership come from the Bullindgon class, I think the tone of coverage would have been very different.

The same goes for the economy. Signs are it is picking up. Have you heard a single difficult question being put to a single senior Tory on the positions they set out at the time the economic crisis developed, which were plain wrong and would have made the recession far worse? No. Because it does not suit the pre-ordained media agenda. Brown bad. Cameron good. Labour out. Tories in.

Despite the largely fawning tone of the conference coverage, my sense is the public, not for the first time, are ahead of the media in starting to think the week is not going as well for the Tories as they or the media might think. 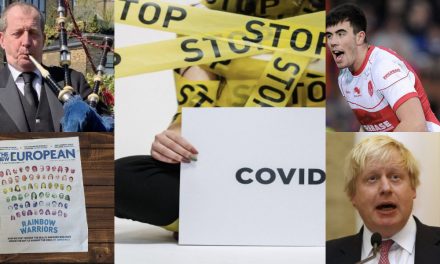